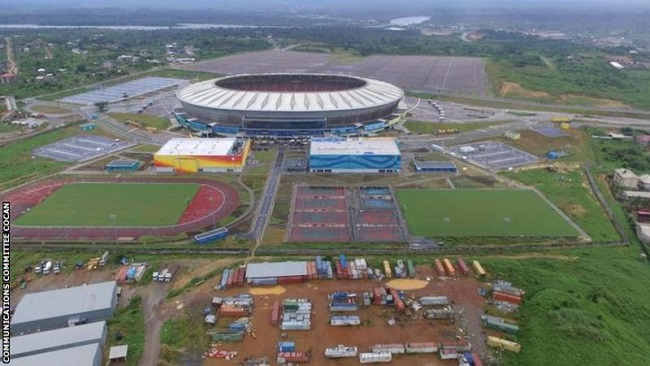 Football 2020: Biya regime ready off the pitch but concerns on it 0

The razzmatazz and hype that comes with hosting the 2020 African Nations Football Championship (CHAN) is evident in Cameroon 30 days before kick-off.

However the preparations for the team, known as the Intermediate Lions, which will represent the hosts at the 16-team event are not going as smoothly.

The continental tournament for players plying their trade in their domestic championships was due to take place in March but was delayed due to the global Covid-19 pandemic.

Cameroon’s government has invested heavily financially and with material resources to build new infrastructure including 50,000-seat stadium in Douala for the tournament.

The country’s Prime Minister Joseph Dion Ngute is very happy with what his country has to offer for the 16-nation event.

“The infrastructure we have here for the CHAN is comparable to what exists anywhere in the world and Cameroonians have to be proud,” Dion Ngute said.

“For the next 100 years, Cameroonians won’t be thinking about constructing stadiums because top quality infrastructure have been erected across the country”

He also admitted that there was need for some “minor adjustments” to be made in order to ensure January’s continental showdown will be a landmark success.

Dion Ngute also hinted that there could be a return of fans to the stands for what he hopes will be an “African football feast”.

The optimism of Cameroon’s officials is shared by the Confederation of African Football (Caf), who during its most recent executive committee meeting agreed that “Cameroon is ready to host the event”.

Caf highlighted that inspection visits to the three host cities Yaounde, Douala and Limbe had shown Cameroon’s drive to organize the event.

After a seven-month hiatus triggered by the Covid-19 pandemic, sports activities in Cameroon resumed in October with several domestic championships now in full gear.

Cameroon’s local organizing committee are hopeful the country’s ability to tackling the coronavirus health crisis can convince Caf to let fans in the stands for the CHAN.

“We are currently negotiating with Caf to see if we can have a significant number of fans in the stadium for the event” the tournament manager Michel Dissake Mbarga told Cameroon’s national radio CRTV.

“The figures speak for themselves. The scrupulous respect for the anti-Covid measures coupled with appropriate medical follow-up has brought Covid-19 under control in Cameroon.

“We are training volunteers on how to manage crowds during CHAN and to ensure that the distancing measures are respected in the various stadia.”

Caf has said that it is “working on a scenario with 25% (of stadium capacity) of fans” and that it is “in contact with the authorities to check if it will be possible.”

Trouble in the Lion’s den

While Cameroon’s plans to host the 2020 CHAN have been impressive that has not been the case for the team that is preparing to represent the country on the pitch.

The Intermediate Lions, as the home side are known, will be competing in the championship for the fourth time with their best finish the quarter-finals in 2011 and 2016.

Ndtoungou, 62, who steered the side to the quarterfinals in 2016 in Rwanda has been tasked with putting together “a conquering side” for Chan.

But the absence of a competitive local championship coupled with an exodus of players has left Ndtoungou angry about his side’s preparation for the tournament.

“We’re supposed to take the best players to the CHAN but where are we supposed to get them from when there’s no championship?” Ndtoungou asked.

“I’m not yet serene over the team’s current situation. We had elaborated a plan hoping that the league will kick off but we’ve had to change everything and it’s just an ugly situation.

“No one is happy with this situation. We’re just trying to limit the damage because right now we’re not where we want to be.”

Ndtoungou’s damning assessment of his team’s build up has seen him resorting to calling up experienced players without clubs.

Earlier this month he named a 28-man squad that included the likes of 34-year-old Patrick Mevoungou, who last played in Saudi Arabia’s second-tier, alongside veteran striker Yannick N’Djeng and 16-year-old Franck Ondoa Edima who both compete for fifth-tier clubs.

Cameroon has been without a championship since March as a fallout of a ferocious power tussle between the Cameroon Football Federation (Fecafoot) and the country’s professional football league (LFPC).

Two months ago 19 top and second flight Cameroonian clubs called for the dissolution of the LFPC, citing the poor organization and management of the leagues.

The decision was endorsed by Fecafoot who stripped the organisation of its rights to organize the country’s domestic leagues.

The LFPC, headed by Pierre Semengue, retaliated by taking a case to the Lausanne-based Court of Arbitration for Sports.

However, Fecafoot’s President Seidou Mbombo Njoya has said he is exasperated with the constant legal battles rocking the country’s football fraternity that has cost “a whopping $2 million” since 2013.

Mediation from Cameroon’s Sports Minister has failed to resolve the issues and the two sides are now gearing up for a fight in the courts.

Culled from The BBC