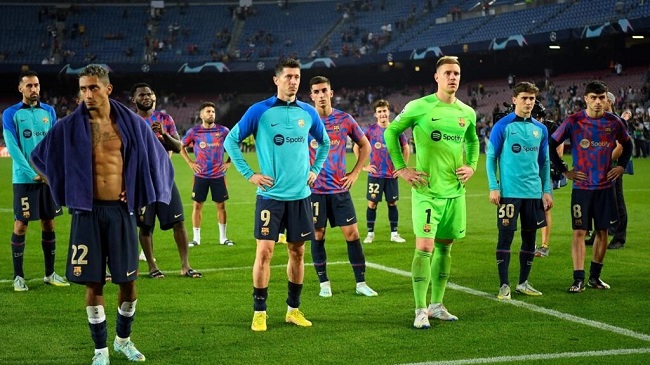 Barcelona exited the Champions League at the group phase for the second season running on Wednesday, a 3-0 home defeat by Bayern Munich rubbing salt in the wound after their fate was sealed 700 kilometres away.

Inter Milan beat Viktoria Plzen at San Siro before kick-off at Camp Nou, ensuring Barcelona would drop into the Europa League again despite their lavish summer expenditure on Robert Lewandowski, Jules Kounde, Raphinha and other players.

With the club 1.3 billion euros ($1.31 billion) in debt at the end of 2021, Barcelona president Joan Laporta pulled “palancas” — levers — all summer long, like a Las Vegas slot machine, until he had cashed out the 865 million euro jackpot he was looking for.

In came those star names, plus a raft of other signings including Franck Kessie, Andreas Christensen and Marcos Alonso, as coach Xavi Hernandez and the board revamped their squad, hunting for instant success.

Enthusiasm soared in Catalonia and attendances rose after the disillusionment of last season, with 84,000 at Camp Nou on Wednesday, despite the improbability, and quickly, impossibility, of the Bayern match being anything beyond an exercise to salvage some pride.

Change has come slower than Barcelona hoped for in Europe and their only win in five group stage matches was over Viktoria Plzen. The Czech minnows’ defeat by Inter left Barcelona with the ignominy of being able to watch in the dressing room as their fate was sealed even before they took to the pitch.

“We didn’t compete today, being knocked out before the game affected us,” Xavi said.

“It was a difficult group and everything went against us. It was cruel.”

The elimination did not dampen the atmosphere at Camp Nou, which was one of the finest in a long time, in stark contrast to what the supporters were watching on the pitch.

Bayern goalkeeper Manuel Neuer was injured but Barcelona did not manage to trouble his replacement Sven Ulreich even once. Bayern swatted Barcelona with ease, with goals from Sadio Mane, Eric Maxim Choupo-Moting and Benjamin Pavard, and Xavi admitted it.

“It was a beating, a tough blow, a huge disappointment,” said the coach.

“They were a lot better than us. In Munich, we were better, but we weren’t today. It’s not hard for me to say it, Bayern were better in many ways. We were not enough in a footballing sense.”

For all their certainty they now had a squad that could compete in Europe, this curtailed campaign was a reality check.

Xavi admitted earlier in October that if the team did not win anything this season then he would likely be sacked, despite his rich playing history with the club and some improvements since his arrival as coach.

“We have a team that can win titles, that’s what I think,” said Xavi. “(After the Clasico) my phone was filled with messages of support, it was like a family member had died. This is Barca and there are no transition seasons.

“We had half of last season to get things in order. The president said there would be consequences and maybe first of all for me. If we don’t win titles then another coach will come in and try.”

Financially the club could lose around 20 million euros in prize money for failing to reach the Champions League quarter-finals, as they had budgeted for, as well as potential income from ticket sales and broadcasting. That would be offset by any Europa League revenue and not having to pay out some bonuses for European success in players’ contracts.

Still, after the heavy summer expenditure, another humiliating early exit rankles. Despite Lewandowski’s supreme form in La Liga, he failed to net in either match against Bayern, his former side.

For all the spending, it was homegrown left-back Alejandro Balde who shone brightest against the Bavarians, a nod towards the other path that debt-ridden Barcelona could have chosen.