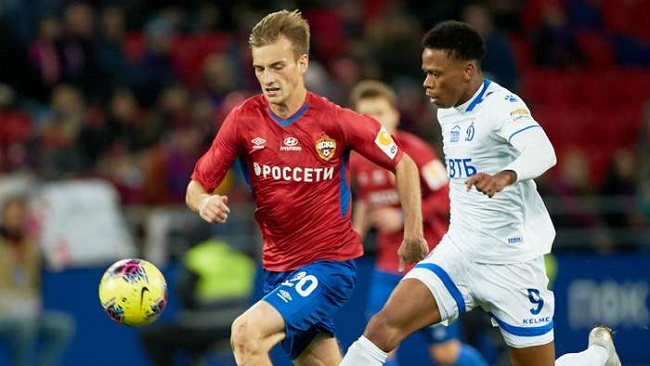 Clinton N’Jie found the back of the net to inspire Dynamo Moscow to a 1-1 draw against FC Ufa in Sunday’s Russian Premier League game.

The forward teamed up with the White and Blues last summer from French side Marseille but did not have the best time in his debut season in Russia.

The striker only scored one goal in 19 league appearances but has hit the ground running in the 2020-21 season.

N’Jie was handed his fifth start in this campaign by manager Kirill Novikov against Vadim Evseev’s side and made the most of the opportunity.

The centre-forward shone in the encounter to ensure his side avoided defeat and stretched their unbeaten run to two games after securing victory over Zenit last time out.

N’Jie opened the scoring in the 43rd minute for the White and Blues after both sides had failed to convert the few chances that came to their ways.

Timur Zhamaletdinov then levelled proceedings moments before the hour mark after he was set up by Aleksandr Sukhov.

The draw is Dynamo Moscow’s second this season, having also won three games and lost one in six outings so far.

N’Jie featured for 78 minutes before he made way for Vyacheslav Grulev while Nigeria international Sylvester Igboun was a second-half substitute for the White and Blues.

The Cameroon striker has played for French side Lyon and Premier League club Tottenham Hotspur before he signed for Marseille permanently in 2019 after impressing while on loan with the side.

N’Jie has been a key member of the Cameroon national team since he made a scoring debut for the West Africans against the Democratic Republic of Congo in September 2014.

The forward has featured 32 times for the Indomitable Lions, scoring seven goals and was part of the side that won the 2017 Africa Cup of Nations title.

N’Jie will hope to continue his fine start to the season when Dynamo Moscow take on Rubin Kazan in their next Premier League game on September 12.