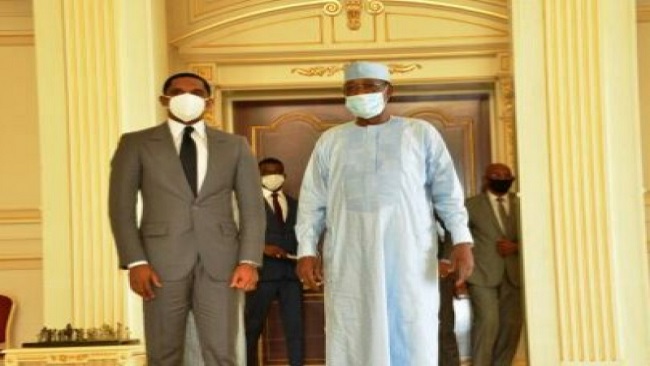 The meeting between the Cameroonian football legend and the Chadian Head of State took place on Thursday, October 15, 2020 in N’djamena, on the sidelines of a tournament for the detection of young talents for which the former La Liga “pichichi” was the special guest.

Samuel Eto’o Fils was received in audience at the presidential palace of N’djamena, by President, Idriss Deby Itno. The “pichichi” and the Chadian head of state exchanged at length on the issue of the development of football in Chad, with the construction of a football school in the Chadian capital, the fruit of a partnership between the Chadian state and the Samuel Eto’o Foundation.

The avenues of a partnership was also explored between Samuel Eto’o’s organisation and the “Grand Coeur” Foundation of the Chadian first lady Hinda Deby Itno, whom the former Barcelona man also met after his audience with the president.

At the end of the tournament, Eto’o selected 15 young Chadians who will benefit from a two-year training scholarship at the Kadji Sports Academy (KSA) in Douala, where he himself was moulded before flying to Europe.