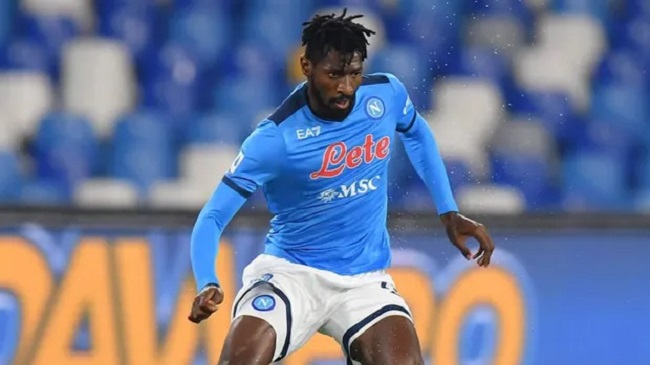 Fulham have confirmed the departure of defensive midfielder Andre-Frank Zambo Anguissa to Serie A giants Napoli.

The 26-year-old Cameroon international, who featured for the Partenopei in most matches of the just-concluded top-flight season as they finished third on the table, has moved to make his loan move from the Cottagers permanent for an undisclosed fee.

“Andre-Frank Zambo Anguissa will join Napoli this summer for an undisclosed fee after the club exercised their option to make his deal permanent,” Fulham confirmed on their official website.

“The midfielder played 30 times this season on loan in Naples, as they secured a third-place finish in Serie A. Anguissa departs Fulham with 66 appearances to his name, and we wish him luck in the future.”

The Indomitable Lion transferred to Fulham from Marseille in August 2018, and was loaned to Villarreal in July 2019 following the Cottagers’ relegation from the Premier League.

He made his Villarreal debut on August 17, playing the full 90 minutes in a 4-4 home draw against Granada. On August 31, 2021, Zambo Anguissa signed a new three-year deal with the Championship club before heading out on loan to Napoli for the 2021-22 season.

At Napoli, he took part in the majority of the club’s Serie A matches, making 25 appearances overall and playing 1,925 minutes. He was selected in the starting XI in 21 of these matches across their 38 fixtures and entered as a substitute on four occasions.

He last featured in a competitive game on May 22, playing just 10 minutes for Napoli against Spezia in a 3-0 victory. In total, the midfielder registered two league assists this season. He debuted in a Serie A fixture for Napoli on September 11, 2021, as a starter versus Juventus aged 25 years and 299 days.

Meanwhile, Fulham topped the EFL Championship table to earn promotion to the Premier League for next season. The Cottagers managed 90 points from 46 matches, while second-placed Bournemouth reached 88 points.