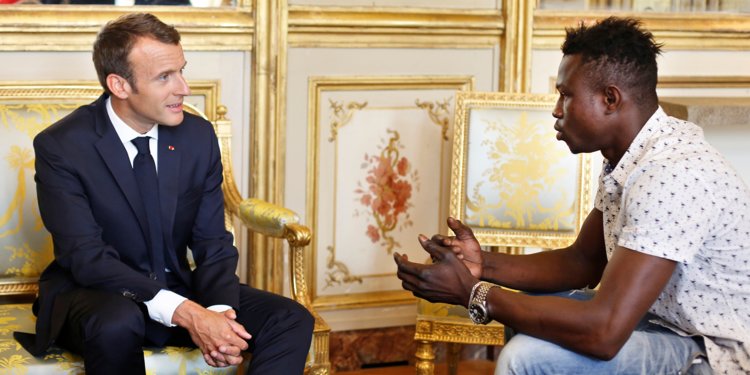 France’s President Emmanuel Macron has offered citizenship to an illegal Malian refugee who earlier risked his own life to rescue a child hanging from a fourth-floor balcony in Paris.

On Sunday, the 22-year-old Mamoudou Gassama, originally from Mali, scaled the facade of a Paris apartment block without any equipment to save a four-year-old boy clinging to railings and about to fall. Gassama’s successful rescue was filmed by horrified onlookers, and the video soon went viral.

Recognizing the heroic act, President Macron met with Gassama in person at the Elysee presidential palace on Monday, congratulating him on the “exceptional” move to save the French boy’s life.

“We’ll obviously be setting all your papers straight and if you wish it, we will start the process of naturalization so that you can become French,” Macron told Gassama.

He also offered the young Malian a job.

“What you have done corresponds with what firefighters do; if this fits your wishes, you could join the firefighters’ corps so that you can do (such acts) on a daily basis,” he added.

Gassama arrived from Mali in France a few months ago. He has been nicknamed the “Spider-Man” following the viral spread of his rescue footage.

“I did it because it was a child,” Gassama told French newspaper Le Parisien. “I climbed… Thank God I saved him.”

Europe has faced an influx of refugees arriving from conflict zones since 2014. Many of the refugees have been fleeing wars and conflicts in their own countries.

There have been instances of crimes committed by a handful of the refugees in Europe, and extremist politicians in European countries have magnified those cases to actively call for a stop to the flow of the refugees and for the deportation of the ones who have arrived.

But while it is an individual case, Gassama’s heroic act is certain to help change public sentiments toward the refugees.

“There is great pride here in Mali,” Thiam said, adding, “But while (Gassama) gets the honors, there are… Malian citizens under the threat of being expelled by the French government.”

Meanwhile, the boy’s father, who had reportedly left the boy alone at home, has been arrested and an investigation is underway to see if he committed a crime. The Paris prosecutor, François Molins, said, “His behavior constitutes an offense, failing to honor parental responsibilities, which carries a possible sentence of two years in jail.”