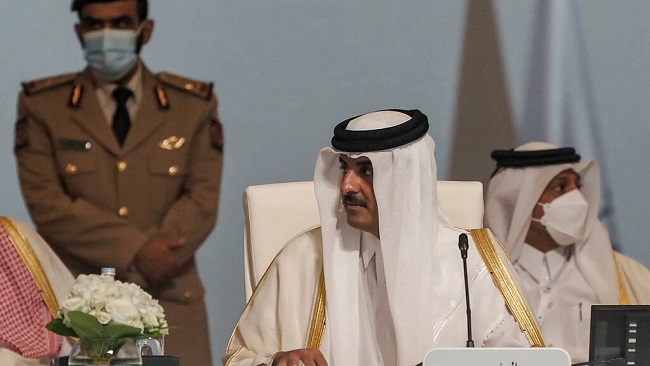 Qatar’s emir said major gas exporting nations were working to ensure “credible and reliable” supplies as he hosted a forum overshadowed by the worsening crisis in Ukraine on Tuesday.

Sheikh Tamim bin Hamad Al-Thani said the 11-nation Gas Exporting Countries Forum, which includes Russia, was striving to preserve stability in world markets, which have been rocked by growing fears of a conflict.

But the group made no immediate promise of extra production for Western Europe, which has sought alternatives to Russian gas as the crisis drives up prices and threatens supplies.

Russia is a key member of the forum, which is taking place after Moscow ordered troops into two rebel regions of Ukraine, prompting international condemnation.

Russian Energy Minister Nikolay Shulginov made no reference to the tensions but he told the forum that “Russian companies are fully committed to existing contracts” for gas supplies.

The United States has asked Qatar to help Europe if Russian gas is cut. But Qatar and other producing countries insist that there are no major reserves that can be diverted to Europe, now paying record prices, unless existing customers, mainly in Asia, agree to give up promised supplies.

Qatar’s emir said forum countries were “working hard to ensure a credible and reliable supply of natural gas to world markets and preserve the stability of those markets”.

The emir and other speakers called for closer contacts with consumer markets to ensure a stable supply of gas, which the forum has been pushing as an essential part of the global drive towards cleaner energy.

The summit was also attended by presidents and prime ministers from Algeria, Iran, Mozambique, Equatorial Guinea and Trinidad and Tobago.

Iran’s President Ebrahim Raisi said his country wanted to increase production and exports but was being held back by what he called “cruel and unnatural” US sanctions against his country.

Major powers are negotiating with Iran to revive an accord regulating its controversial nuclear programme that could provide relief from the crippling sanctions.

Even before the sharp rise in energy prices over the past year, the major gas-producing nations had said they needed long-term contracts to ensure a guaranteed supply to consumers.

The European Union has until recently resisted 10, 15 and 20 year contracts typical in the industry. But Qatar and others say that the massive investment needed to increase production meant they need long term deals.