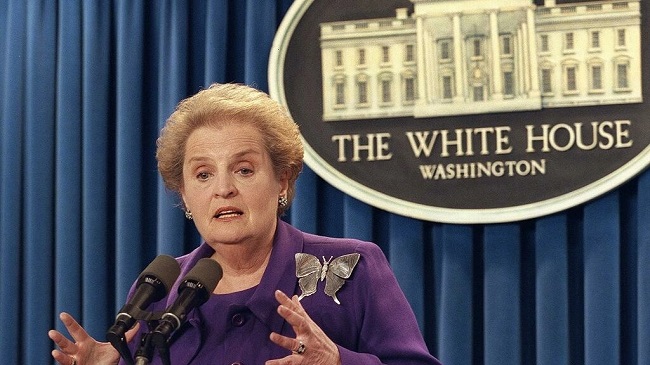 Tributes poured in Wednesday from diplomatic players around the world remembering Madeleine Albright, the first female US secretary of state and one of the most influential stateswomen of her generation, who has died at age 84.

Albright, who came to the United States as an 11-year-old political refugee, rose to serve as the country’s top diplomat under president Bill Clinton from 1997 to 2001.

Albright “paved the way for progress in some of the most unstable corners of the world, and was a champion for democratic values. And as an immigrant herself, she brought a unique and important perspective to her trailblazing career,” Obama said in a statement.

Born in Prague in 1937, Albright’s family — who were Jewish, although she did not know of her heritage until later in life — fled ahead of the Nazi invasion of Czechoslovakia in 1939, losing several family members to extermination camps. She moved first to England, then to America a decade later.

“A Czechoslovak born leader, a strong advocate for democracy & human rights. Today more than ever, Central Europe remembers her commitment to NATO enlargement. My heartfelt condolences to her family,” the Czech Republic’s Foreign Minister Jan Lipavsky said on Twitter.

In a statement, Albright’s family said she died of cancer, “surrounded by family and friends,” and paid tribute to “a loving mother, grandmother, sister and friend” as well as a “tireless champion of democracy and human rights.”

After studying political science, Albright made her entry into politics as a fund raiser, then a congressional aide — and entered president Jimmy Carter’s administration working for Polish-American Zbigniew Brzezinski, who was Carter’s national security advisor.

Polish President Andrzej Duda wrote on Twitter that he was saddened by the death of Albright, who “brought enormous contribution to the transatlantic community of security and of values, including to the accession of Poland and of other European countries to NATO.”

The United Nations, where Albright had served as US ambassador from 1993 to 1997, held a moment of silence for her.

Secretary General Antonio Guterres said he worked with Albright for years both in and out of government and will remember her as a dear friend.

“I was always struck by her wise counsel, deep experience, unique insights, abiding humanity, warmth and wit,” Guterres said in a statement.

“Her life is powerful testament to the invaluable contributions refugees bring to countries that welcome them,” Guterres added.

Albright — whose global influence at the height of her career was compared to that of Margaret Thatcher in Britain — knew she was part of a new generation of women in public service.

“It used to be that the only way a woman could truly make her foreign policy views felt was by marrying a diplomat and then pouring tea on an offending ambassador’s lap,” Albright once said.

“Today, women are engaged in every facet of global affairs.”

At her former department, of which she became the head in 1997, spokesman Ned Price remembered Albright as “a trailblazer as the first female secretary of state and quite literally opened doors for a large elements of our workforce.”

“I know there are many people in this building who are grieving and who will be grieving today,” he added.