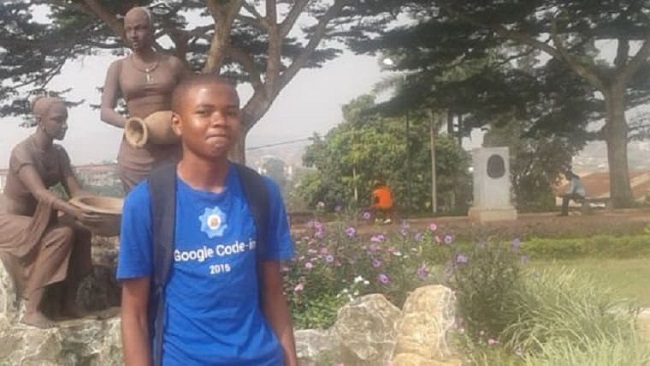 The first African winner in Google‘s annual coding competition is 370km (230 miles) from home, sitting outside his cousins‘ house in the Cameroonian capital, Yaounde, because the government has cut off his hometown from the internet.

As cocks crow in the background, 17-year-old Nji Collins Gbah tells the about the series of complex technical tasks he completed for Google between November and mid-January.

Nji had thrown himself into the contest, using knowledge gained from two years of learning how to code, mainly from online sources and books, as well as other skills he was picking up on the fly.

The prestigious Google Code-in is open to pre-university students worldwide between the ages of 13 and 17. This year more than 1,300 young people from 62 countries took part.

By the time entries closed, Nji had completed 20 tasks, covering all five categories set by Google. One task alone took a whole week to finish.

And then just a day after the deadline for final submissions, the internet went dead.

Nji lives in Bamenda in Cameroon‘s North-West, a journey of about seven hours by road from the capital (according to Google).

It is an English-speaking region where there are long-held grievances about discrimination and what people see as the Francophone establishment‘s failure to respect the status of English as an official language of Cameroon.

In recent months, disgruntlement has escalated into street protests and strikes by lawyers and teachers.

The authorities have responded with scores of arrests and a text-message campaign warning people of long jail terms for “spreading false news” or “malicious use of social media”.

Cutting off the internet, an act still unacknowledged by the government, is seen by rights activists as both punishment and a blunt tool for holding back dissent.

For an ambitious, tech-savvy though outwardly unpolitical teenager like Nji, whose school was already closed because of the protests, living without the internet was unthinkable.

As it was becoming clear that the outage was more than temporary, Nji received some unexpected news – he had been .

“I was really, really amazed,” he says. “It meant my hard work writing a lot of code had really paid off.”

But a champion coder without the internet will not stay on top of his game for long. Hence the trip to Yaounde.

“I wanted to get a connection so I could continue studying and keep in touch with Google,” says Nji.

In due course, he hopes to finish school back in Bamenda, and then study computer science at a good university.

As part of his prize from Google, Nji will spend four days in June at the tech giant‘s Silicon Valley headquarters, meeting its top engineers and gaining insight into one of the world‘s most successful enterprises.

“Hopefully I would like to work there one day, if that is possible,” he says.

At the moment, Nji says he is hard at work building his knowledge of artificial intelligence, neural networks and deep learning.

“I‘m trying to develop my own model for data compression, using deep learning and machine learning,” he says.

His eventual goal is a “huge step” forward in capabilities for data transfer and storage.

In a few days, Nji will turn 18, having already won international recognition for his achievements.

He admits to having gone back through previous years‘ Code-in prize announcements to double-check he was the first African winner.

When I ask, he says he has received congratulations from “a lot of friends and family and some people I don‘t really know”.

Has anyone from the government been in touch?

Back in Bamenda, a city of 500,000 and home to one of the continent‘s brightest young technologists, they wonder when the government will plug the internet back in.