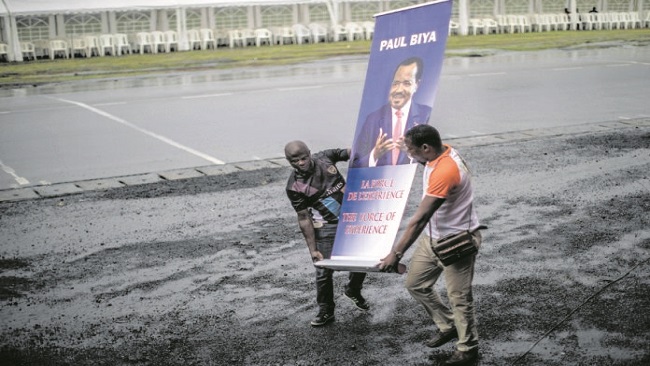 How to stay in power forever: A handy guide for President Biya and his other African leaders 0

1. Enrich yourself, your family and your allies. Don’t listen to those who tell you that amassing a personal fortune is the old-fashioned way. Just as you need a monopoly on violence, you need a monopoly on wealth creation. You and your family must live in the style commensurate with a sovereign national leader: the mansion and private jet are de rigueur if you are to be taken seriously as the power in the land. You need to sustain an expansive patronage network, and you need the cash to ensure your allies are well rewarded and your enemies are … well neutralised.

2. Build a complex and ruthless security system with competing spy agencies over which you have total control. Your system has two goals: to ensure that your subjects know that any attempt to organise against you would be met with stern measures, including extreme violence; and to keep you fully informed of what allies and rivals are doing at all times. Only a multiplicity of agencies – some spying on each other, but all reporting to you directly – will provide the actionable intelligence essential to your survival.

3. Adopt an overarching ideology that combines a sense of hope and nationalism, such as ‘African developmentalism’. This gives your regime the legitimacy it needs. You are a populist leader – never a dictator. The late lamented Mobutu Sese Seko stole and repackaged the ideas of anti-imperialist Patrice Lumumba, which enabled him to posture as a doughty nationalist. You must freely distribute – in the style of Mao and Stalin – millions of books of your deeply held beliefs. Organise mass rallies where people chant your slogans. Ensure that you bring musicians and singers. Remember: ideology plus bread and circuses.

4. Your role as commander­-in-chief of the armed forces is your most important job. Political power grows out of the barrel of a gun, said Mao. Organise military parades regularly and allow public holidays for the purpose. Attendance by civil servants should be compulsory. Make sure you wear a full dress uniform bedecked with medals. Boost military spending massively and display your latest tanks and missiles at the parades. Ensure your generals fear and respect you. Reward loyalty with extreme generosity and repay any sign of treachery with extreme violence.

5. Buy the business elite and bribe their foreign friends. Win over top business people with contracts and concessions as long as they pay off your family and allies. You need friends of convenience in the business world to create a class that has a vested interest in your regime. Offer them monopolies in key sectors and make them pay you a percentage of their earnings. Did you say Cosa Nostra? Big foreign companies are even easier. Promise them legal protection and discretion, and they will aid and abet any business malfeasance as long as its lucrative.

6. Get smart about information. Invest heavily in fake news and propaganda against your enemies, and ensure the national story is your story. The internet can be your friend if you are canny. Pay your supporters to defend you and trash your enemies online. Play down accusations of censorship and paternalism. Instead be selective and just block specific publications and programmes that could threaten you. Filter the internet and pay hackers to attack opposition websites. Bribe journalists. If they won’t accept, find friendly businesses to take over the media companies. And if you really have to, occasionally shut down the internet.

7. Co-option is better than repression. Most opponents have a price, so find out what it is and make them an offer. Pick off your opponents one by one. Send in your bad cops, then be the good cop with an offer of a job – maybe to set up a committee to consider the reforms they are demanding. Show them how much more comfortable life can be inside the tent. Your goal is to divide their organisations and attack their credibility. There is nothing more demoralising for an opposition movement than to see one of its key leaders consorting with the president-for-life.

8. Blame the outsiders. Unite your people against the hidden hand of the enemies who threaten your dear country. When the power goes off or the harvest fails, go on state television and announce a search for the foreign saboteurs. If problems continue, nationalise a few foreign companies or seize their assets and hand them to your local allies, all patriots to the core. Organise a few show trials of selected saboteurs. Step up immigration controls.

9. Lie about the economy. Make sweeping announcements of change and promise everyone a brighter future. In the short-term, explain that we will all have to make sacrifices for the common good. Baffle people with lies, damned lies and statistics. Commission state television documentaries on the phenomenal increase in farm and industrial production. Blame at least some of the shortages on the diversion of resources towards our redoubtable national defence industry. Accuse the whining complainants of lacking patriotism.

10. Incumbency and patience are everything. You have the power. Stay on the throne and wait out your opponents. With the accumulation of power over a long period comes a sense of inviolability. This disturbs those around you, especially the ones foolish enough to harbour thoughts of succeeding you. Once in a while, sit them down and explain the realities of power. You have seen off all the most determined opponents for the betterment of your country … and of course for the defeat of its sworn enemies.