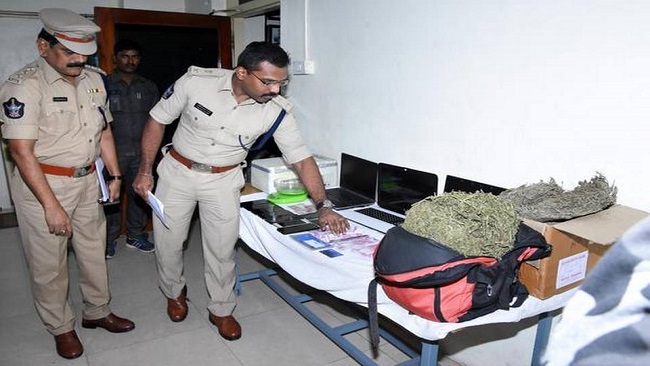 A criminal gang having involvement in multiple formats of crime landed in the police dragnet in Kadapa on Saturday.

With a lodge in Kadapa city as its headquarters, the team of five, including two Cameroon nationals, allegedly committed online fraud by offering medicines at cheaper rate, printed fake currency with the face value of ₹2,000 and even traded in cannabis.

It all started with a complaint on WhatsApp by Abdul Karim of Kerala to the police, which was accepted as a petition under ‘Spandana’ and passed on to Chinna Chowk police for investigation.

Acting on a tip-off to Deputy Superintendent of Police U. Suryanarayana, a police team zeroed in on the private lodge and arrested Mbi Adolf Ashu (31), Akow Bronson Enow (30), both Cameroon nationals and now living in Bengaluru, Chimpiri Sai Krishna (24) of Kadapa, Pangi Dasu Babu (29) and Kurra Jagannath (26), hailing from Paderu and Araku taluks respectively of Visakhapatnam district.

“In the garb of selling wigs and medical products, the two Cameroon nationals allegedly lured online customers with low prices, but never sent the products after getting the money into their accounts,” Superintendent of Police K.K.N. Anburajan said.

The police seized a laptop computer, printer, counterfeit currency with a face value of ₹7.28 lakh and cannabis weighing 9 kg.