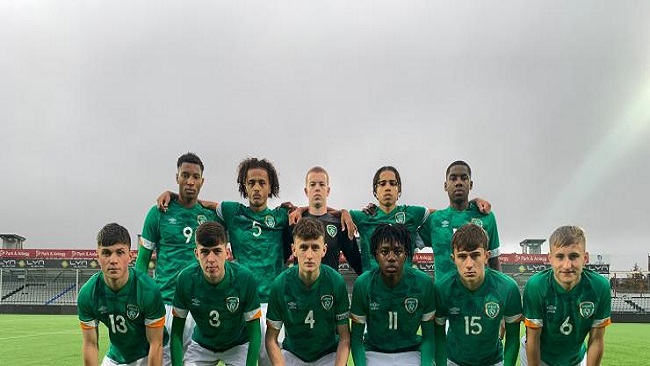 The Republic of Ireland Men’s Under-17s have qualified for the Elite Round of the UEFA European Championship qualifiers following a 1-1 draw with Norway in Sarpsborg this evening.

Nickson Okosun’s first-half strike cancelled out Fanuel Temesgen Tewelde’s opener but Ireland can thank Waterford’s Jason Healy who saved a second-half spot kick to keep the game level . That save earned the point required for Ireland to advance to the next stage of the competition and puts them in the draw for the Elite Phase in December.

Ireland went into the game knowing if they avoided defeat they would qualify for the next stage. After soaking up early pressure from the hosts, Norway were eventually able to breach the Irish backline.

Norway pressed Ireland high and forced an error that led to Fanuel Temesgen Tewelde finding the corner with a finish in the 29th minute.

But this sparked Ireland into life and seven minutes later Bohemians’ Okosun was able to take advantage of hesitancy in Norwegian defence and goalkeeper Daniel Sætren and deliver a composed finished from the edge of the area into an empty net.

The teams would go in at half-time all square and it was Norway pushing to regain their lead in early stages of the second half.

But the crucial point in the game came in the 68th minute when the hosts were were awarded a penalty.

Jake Grante was adjudged to have tripped Gustav Nyheim and the spotkick was given. Walle Egeli’s powerful low penalty was superbly saved by Healy who denied the striker down to his left.

Healy then immediately set-up a counter attack led by Cory O’Sullivan but the Norwegian defence were able to snuff out the danger in time to keep the game level.

With Belarus needing a win and a significant swing in goal difference both teams knew they would advance to the next stage and neither goalkeeper faced too much pressure and the game ended 1-1.

UEFA European Under-17 Championship Round One results

Culled from The FAI