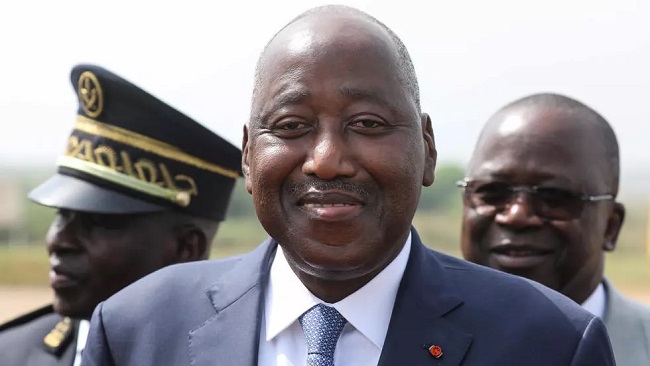 Ivory Coast’s ruling party has named the prime minister as its candidate for the October presidential poll, after President Alassane Ouattara ended months of speculation and said he would not seek a controversial third term.

The choice of Amadou Gon Coulibaly, a close friend and confidant of the president, comes ahead of a challenging election for the West African country — the world’s top cocoa producer and home to more than 25 million people.

A 2010 vote ended in violence between rival political factions which left 3,000 people dead.

“I have appealed to all my sisters and brothers to be united,” he added. “We must win these elections in the first round.”

The constitution allows only two presidential terms, but Ouattara, 78, had said he would be able to stand due to a constitutional change in 2016 — a claim rejected by the opposition.

Analysts say it was essential to announce Ouattara’s choice of candidate quickly.

“The RHDP has stepped up the tempo to give Amadou Gon Coulibaly time to campaign and be visible,” said political scientist Jean Alabro.

“From the moment Ouattara was no longer a candidate, he had to readjust the strategy in order to mobilise around the new leader, and to remove any hint of another candidate,” added political scientist Arthur Banga.

While the choice of Coulibaly was not unexpected, the announcement — made without a vote and a week after Ouattara ruled out running in the October 31 race — came as a surprise.

The 61-year-old has spent his career in the shadow of the president.

“I’ve been learning alongside President Alassane Ouattara for 30 years,” he said Thursday.

He was the president’s secretary general from the time Ouattara came to power in 2010 until his appointment as prime minister in 2017.

Before that he was a senior civil servant and minister of agriculture. He was trained in France and, like Ouattara, has a good grasp of international finance.

“If we want our country to continue to evolve in the spirit of (Ouattara’s) governance, Gon (Coulibaly) is best placed,” said Hamed Bakayoko, the defence minister.

Coulibaly is from a large family in the country’s north and is very influential among traditional chiefs. He was mayor of Ivory Coast’s fourth-largest city, Korhogo, from 2001 to 2018.

Ouattara had kept Ivorians guessing over his political future, saying last year that he could run again if his traditional rivals were candidates.

Since the death of founding President Felix Houphouet-Boigny in 1993, Ivory Coast politics have been dominated by three men: Henri Konan Bedie, Laurent Gbagbo and Ouattara.

Gbagbo, who refused to step down after losing elections in 2010, was acquitted by the International Criminal Court last year on charges relating to the unrest triggered by his bid to cling on to power.

Bedie, who will be 86 during the October election, has not ruled out running.