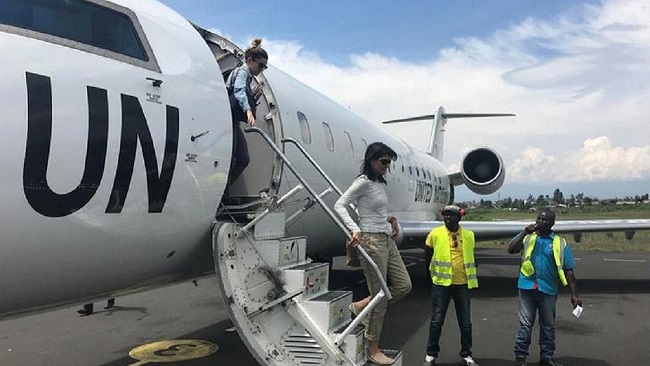 Congolese President Joseph Kabila has put off a planned visit this week by U.N. Secretary-General Antonio Guterres and refused to see U.S. Ambassador to the United Nations Nikki Haley, who diplomats said had also separately planned to visit Kinshasa.

“As for Nikki Haley I don’t see why and how the president’s refusal to see her has created so much controversy. Nikki Haley … was already in DRC (Democratic Republic of Congo) and she met President Kabila,” Mende said.

Haley met privately with Kabila for 90 minutes in Kinshasa in October, warning him that “a relationship with the United States is dependent on how he acts going forward.” Diplomats said she had planned to visit again this week.

The U.S. mission to the United Nations was not immediately available for comment on Haley’s trip.

“Is it the case that in all African countries in the middle of the electoral process these same visitors come to verify if the preparations are going in the right direction? If yes, they are also welcome in our country,” Mende said.

Kabila was required by the constitution to step down in December 2016 but the election to replace him has been repeatedly delayed.

Since then, security forces have killed dozens of anti-Kabila protesters while surging militia violence has raised the specter of a repeat of civil wars around the turn of the century that cost millions of lives.

Term limits prevent Kabila from running for office again, but he has refused to publicly commit to leaving office and some of his supporters have recently floated a legal rationale that would allow him to stand again.

Candidates are due to register for the presidential election between July 25 and Aug. 8.

U.N. spokesman Farhan Haq said there had been not been any “firm plans” for Guterres to visit Kinshasa. “If and when he’s ready to go there, we’ll let you know,” Haq told reporters on Monday.

Guterres is currently in Ethiopia at the African Union and diplomats said he had planned to visit Democratic Republic of Congo this week. The United Nation’s largest and most expensive peacekeeping mission, known as MONUSCO, is in the country, where some 18,000 U.N. troops and police are deployed.

The Congolese foreign ministry said in a statement that Guterres and Faki “remain welcome in Kinshasa at a date to be agreed on jointly.