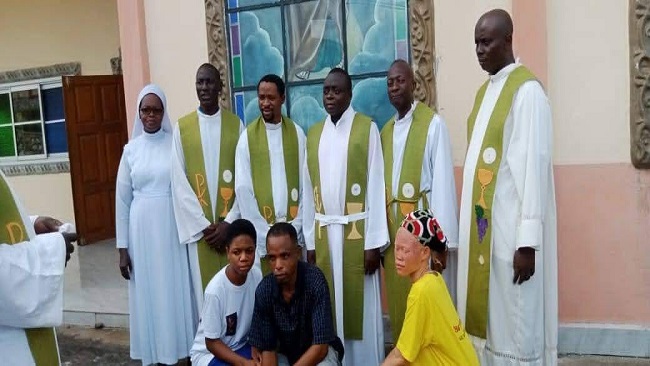 Nine captives, including five priests and a religious sister, were released in Cameroon Saturday, more than a month after they were kidnapped.

The kidnappers struck on Sept. 16 at St. Mary’s Church in Nchang, in the troubled Southwest Region of Cameroon. They reportedly burned down the church and seized five priests, a religious sister, a male catechist, a female cook, and a 15-year-old girl living with the sisters. The captives were dubbed the “Nchang Nine” by local media.

“I take this opportunity to once again condemn in the strongest possible terms the desecration of the Church and to point out the need to protect human dignity,” Bishop Abangalo said.

“Depriving our brothers and sisters of their freedom to obtain money at any price is inhumane. For those who make statements that fuel such actions, I believe it is time to rethink one’s approach and ensure that the dignity of the human person is defended in every possible way.”

Agenzia Fides said that, although the kidnappers’ identities had not been confirmed, one of the freed captives thanked the Freedom Fighters of Ambazonia in a short video “for having released us without paying any ransom.”

Ambazonia is the name of an unrecognized breakaway state in the English-speaking area of the predominantly Francophone Cameroon.

Agenzia Fides said that the Freedom Fighters of Ambazonia could be a new organization seeking international attention through the kidnapping or “a criminal group hiding behind a political acronym to carry out kidnappings for extortion purposes.”

The Diocese of Mamfe is in the ecclesiastical province of Bamenda, which is overseen by Archbishop Andrew Nkea.

In an Oct. 4 interview with The Pillar, Archbishop Nkea said that the Church had maintained contact with the kidnappers throughout the ordeal.

“They were asking us for money and we don’t have money to give. And even if we had the money, we know that if we start, we’ll never stop. And it’s something we had agreed that we would not do — give money to kidnappers — because then we endanger the lives of all our priests and our Christians,” he said.

Pope Francis appealed for the Nchang Nine’s release during his Angelus address on Sept. 25.

The kidnappers issued a video on Oct. 19 showing the captives pleading for Church leaders to secure their release.

A civil war — known as the Anglophone Crisis or Ambazonia War — has raged since 2017 in Cameroon, pitting separatists against government forces, with Church workers often caught in the middle of the conflict.