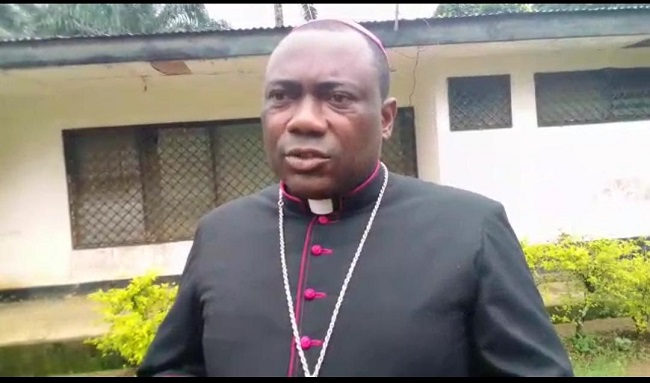 “It took years for the Church to bring Jesus into this land and I am sure it will take years to bring Jesus back!! All I ask for is that we should pray for the release of the five priests, the religious and the two Christians who were all abducted” was the message from the Bishop of Mamfe, Dr Aloysius Fondong Abangalo, after he visited Nchang village following this week’s terror attack on St. Mary Catholic Church Nchang.

In a soul-searching presentation, His Lordship Dr Abangalo stated that there was an urgent need for the entire diocese of Mamfe to hold a service of prayer and seek penance.  The Bishop said that the atmosphere in his diocese was sombre and heavy and that things may never be the same as they were before.

The Bishop’s House is offering support to the Christians in Nchang and the families in pain, but Christians everywhere deep within the Mamfe Diocese should join us in prayer and in saying the rosary, Bishop Aloysius Fondong said.

Speaking on BBC radio, the head of the Bamenda Ecclesiastic Province, Archbishop Andrew Nkea, said that the Roman Catholic Church in Cameroon was in shock after the attack.

No Southern Cameroons armed group has claimed responsibility for the attack.

Manyu Division had already been in a state of heightened alert since the beginning of the crisis in Southern Cameroons. But it is surprising that soldiers have not been guarding churches and public spaces.

Christian leaders in many parts of Cameroon and even beyond have condemned the terrorist attack on the St Mary Catholic Church in Nchang.

Bishop Bibi Michael of the Buea Diocese reportedly sent a message to the Bishop of Mamfe expressing his deep sorrow saying Christians in the Mamfe Diocese are in need of our prayers as they minister the love of God to the stricken village.