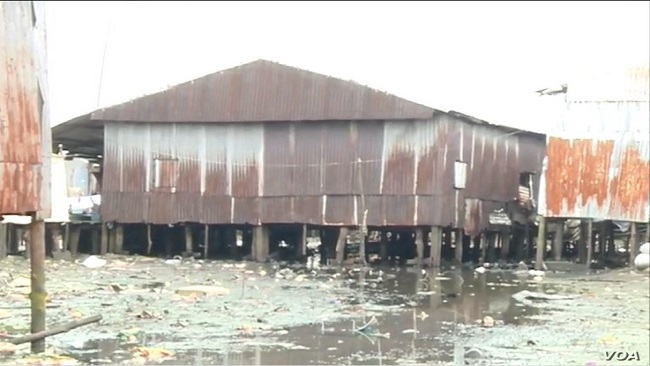 Cameroonian health and emergency personnel are working to stem a cholera outbreak that has killed at least a dozen people and sickened at least 100 others in the Bakassi Peninsula that shares a maritime boundary with Nigeria.

It is feared the outbreak will claim more lives in the coastal area, which lacks health infrastructure.

Emergency medical workers, together with some civilians, are working to improve hygiene and sanitation by clearing dirt and debris from water beneath houses on the shores in the area. Among them is 31-year-old Cameroonian fisherman Lucas Emimo, who says he lost his younger sister to cholera. Emimo says he has joined the humanitarian workers because he fears many more people may die from the infectious disease that causes severe watery diarrhea, leading to dehydration and even death if untreated.

“We lack toilets, potable water,” Emimo said. “There is no hospital. People defecate beside the sea, under the houses, everywhere and so it makes the place not good to stay.”

Dr. Ebongo Zakius Nandji, the area’s top health official, says humanitarian workers were deployed when news broke that people were dying and some were being rushed to hospitals. He says there is no doubt cholera is to blame.

“Upon the reception of a distress signal from our team in the Bakassi health district, we came down to [the city of] Idabato, myself and my entire emergency response team,” Nandji said. “The situation on the ground really sends a pointer to the fact that we are in an outbreak of cholera.”

Nandji said six people had been reported dead and hundreds of suspected cholera sufferers were still in villages around Idabato. Civilians said they had buried six others before the medical team’s arrival. The actual death toll could be higher, because many live in remote locations, complicating efforts to get accurate health data.

Nandji urged people to be vigilant and report any cholera symptoms.

But the government says only 20 percent of the population visits hospitals. Most of them prefer traditional African medicine. Some complain that the only government hospital in Idabato is understaffed and lacks medication.

Roland Ewane, a top Cameroonian official in Idabato, says Nigerians living in the region prefer to return to their country for health care. However, making the journey reduces chances of survival for cholera patients.

“We have a population of about 40,000,” Ewane said. “They are mostly Nigerians. We have been carrying out sensitization campaigns [educating the population] on the necessity of using or the importance of using government services. One of them is the hospital. They do not come to the hospital. It is a big cry [to use hospitals].”

The Bakassi Peninsula is by the sea, but potable water is hard to find. Few have toilets and the local hospital struggles to handle epidemics.

Nigeria ceded full control of the Bakassi Peninsula to Cameroon in 2013, in keeping with a 2002 International Court of Justice ruling. Some 300,000 Nigerians live on the peninsula — approximately 90 percent of its population. The territory is rich in hydrocarbons and fisheries, but lacks basic social services.

Most health workers trained by Nigeria to serve in the area returned to their country when Cameroon did not continue paying their salaries. Some also fled attacks by separatists fighting for the independence of Cameroon’s English-speaking regions from the French-speaking majority. Cameroon has faced difficulties replacing departed medical staff.