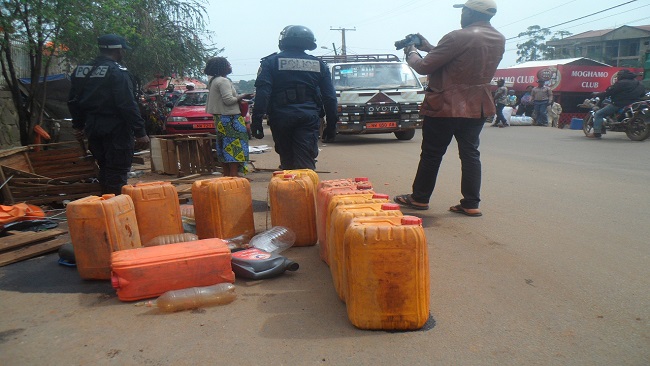 The Adamawa and Taraba Area Command of the Nigeria Customs has intercepted a truckload of petroleum products about to be smuggled into Cameroon at Sahuda border post bordering Nigeria and Cameroon in Adamawa State.

Kamardeen Olumoh, the Area Comptroller of the Command, while displaying the seizure before journalists in Yola, said the agency had beamed its searchlight on transborder smuggling of petroleum products which is capable of engendering artificial scarcity of the product.

“These drums here, about 90 of them, contain 20,550 litres of petrol concealed in a truck loaded with assorted household consumables, heading to the Cameroon Republic,” Mr Olumoh said.

“This command has declared zero tolerance to any act capable of undermining the economic strength of our dear country.

“We will not allow unscrupulous elements who are bent on sabotaging the economy of Nigeria to take advantage of the proximity to the border to engage illicit trans-border activities.”

Mr Olumoh said some unpatriotic citizens are bent on sabotaging the system through illegal activities that constituted economic crimes against the nation besides its attendant hardship on innocent citizens.

He said the fuel scarcity experienced in the recent past, especially within the two states, was as a result of the activities of smugglers, adding that the command under his watch has stepped up its game to forestall the movement of unauthorised fuel out of the country.

Mohammed Alaku, DPR Area Comptroller for Adamawa and Taraba Zone, said the cross-border smuggling of petroleum had aggravated the suffering experienced by residents of the two states during the recent fuel scarcity experienced in the country petroleum.

Mr Alaku said business operators willing to explore legitimate means of doing trans-border business would benefit, assuring them that the customs was ready to support only legitimate businesses involved in the import and export trade.