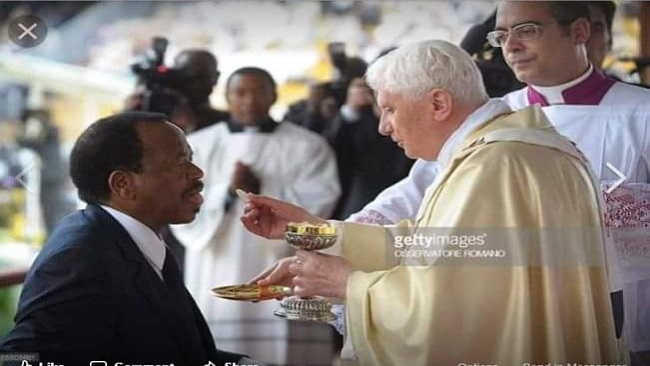 When Paul Biya came to power in 1982, many thought Cameroon was going to get into a brand new and bright era.

Under the country’s first leader, Amadou Ahidjo, the reclusive Biya who was wont to riding his bike in Yaounde and playing golf in Tiko, had packaged himself as a man of the people.

He had attended one of Cameroon’s most prestigious high school, College Vogt, and the story around the country was that he was religious and had even contemplated becoming a priest.

These pieces of information were all over the country like a bad rash and Cameroonians knew their time in the spotlight had come.

The man who had to take them to the land of promise had come, but not like a knight on a white horse. Biya was marketed as the leader who would make his people’s problem the centerpiece of his presidency.

To prove that he was indeed a godly person, Biya, the hypocrite-in-chief, quickly invited the Pope to Cameroon. Cameroonians were ecstatic. They loved what they were seeing.

But in life, what you see may not be exactly what you get. Time had to prove to them that Biya, as packaged by the sycophants around him, was purely a mirage.

In less than three years in power, Paul Biya, who was supposed to take Cameroonians to the land of promise, started leading them down a dangerous path of corruption, nepotism, tribalism and dictatorship.

If you disagreed with him even on policy matters, Paul Biya, the self-made monarch, would chop you of his orbit.

Samuel Eboa, Ayissi Mvondo, Francois Senga Kuo, William Eteki Mbouma and Delpine Tsanga have all felt the wrath of a man they knew would take the country down a dangerous path.

His inefficiency and incompetence had all been hidden from the public, after all, the country was a dictatorship, even in the days of the country’s first president, and nothing was allowed to filter out.

Amadou Ahidjo, the country’s first president, who ruled the country with an iron fist, loved Paul Biya, not for his capacity to deliver, but because of his sheepish docility to him.

Ahidjo loved people he could spin around his little finger and Biya was designed to be a yes man and to him, flattery was second nature.

Biya never does anything for anybody if there is no quid pro quo. If you must be part of his cabinet, then you must be able to promise gold to your people and deliver pebbles to them.

You must make your people to understand that Biya, the man many thought was more spiritual, is indeed a reincarnation of Jesus.

You must sing his praises even when things are falling apart. You must always tell your people that Biya is engineering better days even when the present is full of uncertainty and death.

The story of Mr. Biya, the country’s omnipotent leader, is more like the story of modern-day Pentecostal churches whose pastors are there to rip off their people while promising them that theirs will be the imaginary Kingdom of Heaven.

The Biya regime, considered by many as a crime syndicate, stands ready to rip off Cameroonians. While Cameroonians are going through the toughest times of their lives, the president and his wife, noted for her flaming red hair, are throwing sumptuous birthday parties and musical concerts only for themselves and their families.

While Cameroonians are gnashing their teeth because of the dehumanizing poverty the Biya regime has engineered for them, Mr. Biya’s children are all over the world burning through money like wildfire.

The country’s economy has taken a nosedive and millions are dying every day in the country’s two English-speaking regions because of a war that could have been averted. Despite all of this suffering, the ‘Monarch of Mvomeka’a is still living as if nothing is happening.

Today, it is normal for women to die while in travail. The country’s hospitals have been reduced to consultation clinics. While the president and his family enjoy world-class medical care abroad, Cameroonians are stuck with health facilities that are bereft of reliable medical equipment.

Politically, the Monarch of Mvomeka’a is facing numerous challenges. While Anglophones are gradually walking away from a lopsided union that was hastily put together by the country’s first president and greedy elements such as John Ngu Foncha and Solomon Tandeng Muna, the majority of Francophones are gradually making the country ungovernable.

In 2018, Mr. Biya managed by crook to win a new 7-year term, but he is always ill at ease as the world despises him and reminds him that the real winner of the election was Prof. Maurice Kamto, the man who has remained millstone around Mr. Biya’s neck.

To stop Prof. Kamto from eroding whatever credibility he still has, Mr. Biya last year jailed the country’s leading opposition figure for eight months.  But this only turned out to be counterproductive.

A huge whirlwind of opposition against Mr. Biya has emerged known as the Brigade Anti-sadinard (BAS) and this group is a living nightmare to Mr. Biya.

The group has been very active in Europe, especially in France and Switzerland, and it did indeed succeed to compel the Swiss to chase Mr. Biya out of the country when he was in Switzerland for medical attention.

In his own words, the French president last week said that he obliged Mr. Biya to release Kamto, failure of which, he would not receive Biya when he came to France. The pressure paid off and once more, the world understood that while Biya might be the president of Cameroon, the real decisions on the country’s destiny were actually taken in Paris.

The world is therefore calling on Macron to call for a halt in the killing of Southern Cameroonians by the Biya regime that has rejected all advice given to it by many authoritative voices across the globe.

Speaking last week in Paris to a Cameroonian activist, Mr. Macron promised that he would be calling Mr. Biya next to let him know that his actions in the country’s two English-speaking regions were unacceptable.

The world is waiting and it would be a great relief to many across the world if French pressure pays off.

But many critics of French policy in Africa are skeptical about Mr. Macron’s promises. Some fear it could simply be a tongue in cheek criticism of the man who has worked so hard to preserve French interest in Cameroon.

Despite all the doubts, there is some hope. It is not normal for a French president to criticize a friend and ally in Africa, especially an elder statesman like Biya who has been there for the French for almost four decades. The world is waiting to see if the hypocrite-in-chief will make some amendments to his ways in the days ahead due to French pressure.