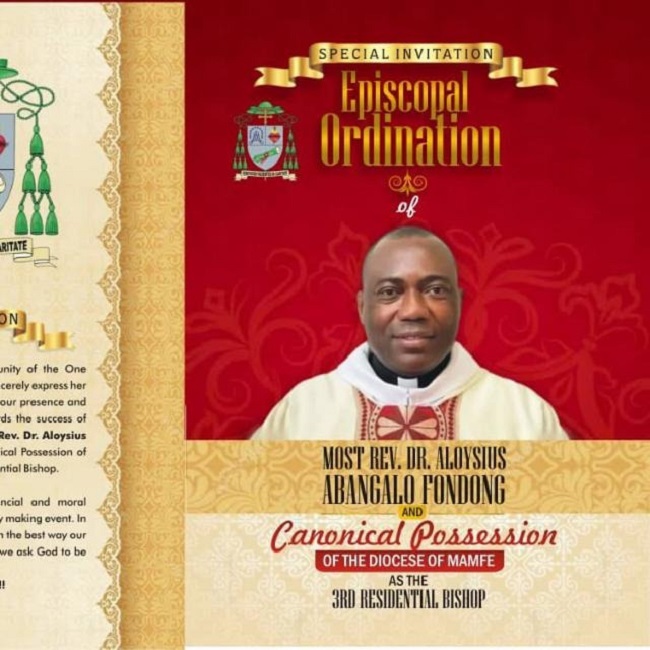 Preparations underway for ordination of new Bishop of Mamfe 0

Preparations are under way for a very special day in the history of the diocese of Mamfe – the Episcopal ordination of Aloysius Abangalo Fondong as the third residential Bishop of Mamfe on May 5, 2022. He will be ordained at St Joseph’s Cathedral in New layout Mamfe. A large number of Roman Catholic clerics from around the Bamenda Ecclesiastic Province will join members of his family, colleagues and friends to witness his ordination.

His appointment was announced recently by the Holy Father Pope Francis. A native of Lebialem Division in the South West, Bishop Fondong was a priest of the Buea Diocese who studied Canon Law in Rome. He was a lecturer at the St. Thomas Aquinas Major Seminary in Bambui.

Bishop Aloysius Fondong was ordained a priest on April 20, 2006 in Buea. He has held the following positions in the Church hierarchy: Vicar of the Holy Family Parish of Limbe (2006-2007); Dean of Our Lady of Grace College in Muyuka (2007-2009); Diocesan Treasurer and Member of the College of Consultors (2009-2011); Teacher and trainer at St Thomas Aquinas Major Seminary in Bambui and Defender of the Bond at the Inter-diocesan Tribunal of Bamenda (2014-2019).

The diocese has been without a bishop ever since Bishop Andrew Nkea was appointed Archbishop of the Bamenda Archdiocese.