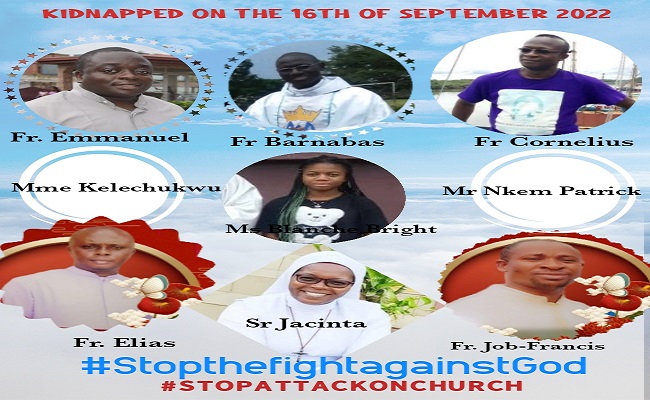 A video has emerged on social media that shows five Catholic priests, a nun, and three others who were kidnapped last month in Cameroon’s Mamfe Diocese pleading with their local ordinary to secure their release.

On Sept. 16, unidentified gunmen attacked St. Mary’s Catholic Nchang Parish of Mamfe Diocese in Cameroon. Nine people were abducted and buildings on the parish premises, including the church, were burned down.

In the 45-second video circulated Oct. 19, Father Jingwa, one of the abductees, provides updates about their welfare and pleads with Bishop Aloysius Fondong Abangalo to do “everything possible” to secure their release.

“So far it has not been easy. If you look at us, you will see our faces are very dismal, very unhappy,” Jingwa says in the video.

He adds: “It is quite difficult and we are only begging My Lord that you do everything possible to get us out of here.”

“It is a matter of do or die,” the priest laments.

“You see for example, I have been very sick, my brothers too are not feeling fine at all,” he continues.

“Please kindly, My Lord, help get us out of here. Do whatever it takes to listen to this voice and do what they ask of you. Thank you.”

In a Sept. 21 interview with ACI Africa, Archbishop Andrew Nkea Fuanya of Cameroon’s Bamenda Archdiocese said the abductors “are only asking for money.”

“Those who abducted these people and set the church ablaze are only asking for ransom,” Nkea said.

“They are demanding $100,000 and they have been arguing and coming down. They are somewhere around $50,000 but we don’t have even a dollar to pay for this kind of thing,” he added.

According to Nkea, the abductors, who claim to be separatist fighters, “see the Church as a soft target to be able to make money.”

“But the Church has no money to pay ransom,” Nkea told ACI Africa.

The archbishop further said that the abductors “are claiming that the Church has not been supporting the struggle for independence by separatist fighters and so they want money.”

“We have tried to explain to all those who have … tried to abduct ministers of the Church that the Church cannot be paying ransom to separatist fighters or to criminals,” said Nkea, who has been head of the Bamenda Archdiocese since February 2020.

The arson attack on St. Mary’s Catholic Nchang Parish is one of the latest incidents in the conflict in Cameroon’s English-speaking northwest and the southwest regions. The conflict was sparked by a protest involving lawyers and teachers in 2016.

An armed separatists’ movement claiming independence for the so-called republic of Ambazonia emerged following the government’s crackdown on the protests.

English is spoken by about 20% of Cameroon’s population, who have long complained about being marginalized by the French-speaking ruling class.

On Sept. 17, members of the Bamenda Provincial Episcopal Conference called on those behind the abduction “to release them without further delay.”

In a statement issued Sept. 21, Bishop Abangalo appealed for prayers for the safe release of the nine abductees.