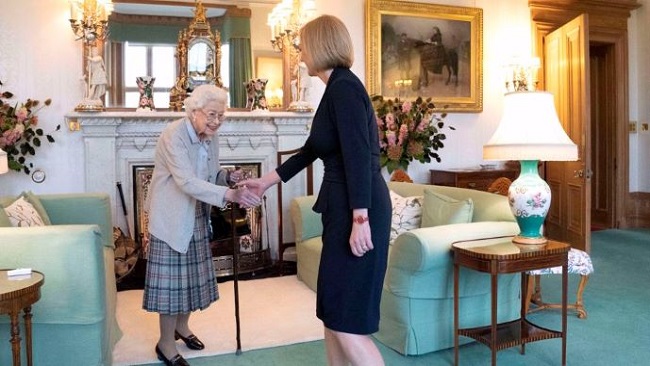 Truss, 47, on Monday won the ruling Conservative Party’s leadership contest, gaining the parliamentary majority to become the country’s next prime minister and replacing her predecessor, who was forced to resign.

“The Queen received in Audience The Right Honorable Elizabeth Truss MP today and requested her to form a new Administration,” a Buckingham Palace statement said.

“Ms. Truss accepted Her Majesty’s offer and kissed hands upon her appointment as Prime Minister and First Lord of the Treasury,” it added.

Truss is set to form a new government, with the country facing skyrocketing inflation, which has caused the worsening cost-of-living crisis in the UK.

The new prime minister, who has promised tax cuts to relieve the burden of a toxic economic situation on people, has said that she is going to set out “immediate action” in her first week on the job to tackle rising energy bills and to increase energy supplies.

The outgoing Boris Johnson, who was forced to resign after a series of scandalous incidents, delivered his farewell speech on Tuesday, vowing support for his successor during a “tough time”.