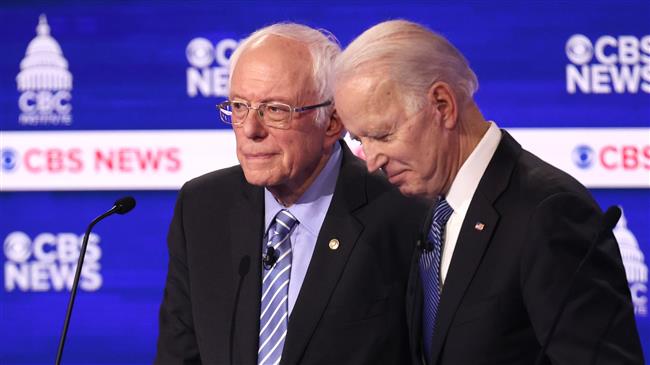 Bernie Sanders has overtaken Joe Biden and opened up a seven-point lead over President Donald Trump, according to a new Fox News poll.

The survey published by Fox News on Thursday night found that Senator Sanders (I-Vt.) jumped eight points since the same poll was conducted in January, with 31 percent of Democratic primary voters backing him for the 2020 nomination.

By comparison, former Vice President Biden slumped by eight points into second place as just 18 percent of Democrats favored him, according to the poll’s finding.

When asked which candidate they would like to see become the Democratic nominee, 16 percent of polled party voters said they backed Bloomberg, putting the billionaire six points up on his January rating.

No other candidate in the primary field polled at double-digits, with the once-insurgent Senator Amy Klobuchar (D-Minn.) seeing herself backed by 5 percent of party voters, despite a surprisingly strong performance in the New Hampshire primary.

Fox News reported that its latest poll of the 2020 Democratic primary field was the first not to show Biden as the frontrunner, and the only one to show five candidates with double-digit support. A plurality (45 percent) also said they would support whichever candidate was chosen to face President Trump in the November presidential election.

But just less than a fifth of polled primary voters (18 percent) said they would refuse to support Sen. Sanders or Bloomberg in 2020, while 13 percent said the same of Biden and Warren.

When asked who they believed could beat President Trump later this year, Democrats put the most faith in Sen. Sanders.

Almost two-thirds (65 percent) said they fancied the Vermont senator’s chances of winning, while 57 and 56 percent said the same of Bloomberg and Biden respectively.

But only a little more than a third of party voters said they believed either Sen. Warren or Buttigieg could beat Trump.

In hypothetical head-to-heads between primary candidates and President Trump, a cross-party sample of registered voters told Fox News they preferred much of the Democratic field to the commander-in-chief.

Biden and Bloomberg had the joint-greatest leads over the president among Democrats, with both being separated from Trump by eight points.

Sen. Sanders was found to come seven points ahead of the president, with 49 percent opting for him and 42 percent supporting the commander-in-chief.

Both the former Mayor Buttigieg and Sen. Warren were found to be three points ahead of the Republican incumbent, putting them within the margin of error.

A total of 1,000 registered voters were surveyed nationwide between February 23 and February 26 for the Fox News poll, which has a 3 percentage point margin of error.