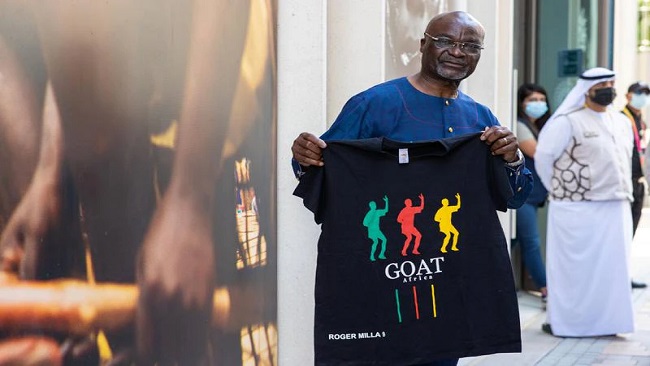 Football fans were treated to a throwback to a bygone era at Expo 2020 with the visit of Cameroon legend Roger Milla to the country’s pavilion.

The former striker, named the best African footballer of the previous 50 years in 2007 by the Confederation of African Football, shot to worldwide fame at the age of 38 when he scored four goals for Cameroon at the 1990 Fifa World Cup in Italy, marking each one with his trademark celebratory dance at the corner flag.

Aged 42, Mr Milla came out of retirement to play in the 1994 World Cup in the USA and broke his own record for being the oldest goalscorer in a World Cup by netting against Russia.

Mr Milla, now a Roving Ambassador of Cameroon, visited his country’s pavilion in the Opportunity District, where he met officials from the pavilion and a number of fans.

In an interview with the media team at Expo, Mr Milla revealed that this 15-year-old son plays in Dubai and is enrolled with the Fursan Hispania Academy, which was founded by former Spain and Real Madrid star Michel Salgado.

“I hope that by the next year or two, he will be like his father and will be able to play for his country,” Mr Milla said.