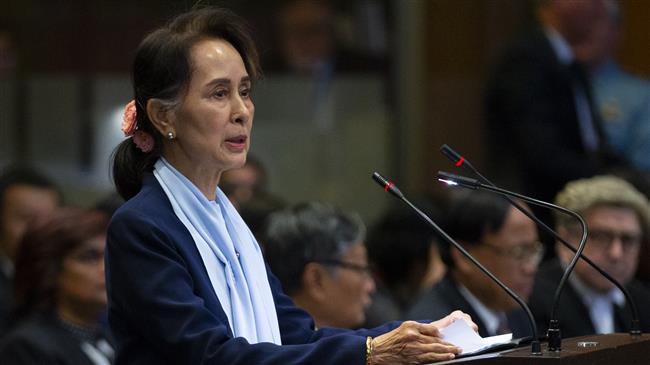 Myanmar’s de facto leader Aung San Suu Kyi, feted in the West as a heroine of democracy, has defended her country’s atrocities against Rohingya Muslims at the UN’s top court in the Hague.

The Nobel Peace laureate on Wednesday spoke for about 30 minutes at the courtroom in defense of the actions of the Myanmar military that for years had kept her under house arrest.

She claimed that the military’s actions, which have brought genocide allegations in a lawsuit filed by Gambia, were in fact a “clearance operation” in response to militant attacks against police stations in Rakhine State.

Suu Kyi then accused Gambia, acting on behalf of the 57-nation Organization of Islamic Cooperation, of making “incomplete and misleading” accusations and said the case should not be heard by the Hague.

Around 740,000 Rohingya fled to neighboring Bangladesh after a bloody crackdown by the Myanmar military in 2017 that UN investigators have already described as genocide.

On Tuesday, Suu Kyi listened with a stony face to accounts by lawyers of Rohingya victims, including a mother whose one-year-old son was beaten to death and an eight-month-pregnant woman who was stamped on and then repeatedly raped.

Dildar Begum, a Rohingya widow from Tula Toli village in Myanmar, broke down in tears while describing the killings in her village she says were carried out by the Myanmar army and militias.

Suu Kyi said while disproportionate military force may have been used and civilians killed, the acts did not constitute genocide.

“Can there be genocidal intent on the part of a state that actively investigates, prosecutes and punishes soldiers and officers that are accused of wrong doing?” she claimed.

Last year, Myanmar’s military announced that seven soldiers involved in a massacre of 10 Rohingya men and boys in the village of Inn Din in September 2017 had been sentenced to “10 years in prison with hard labor in a remote area”.

They were the only security personnel the military has said it has punished over the 2017 operation. They were granted early release after less than a year in the prison.

One of the soldiers confirmed to Reuters that he had been released but declined to comment further, saying: “We were told to shut up.”

Two fellow inmates told the news agency that the release came in November – less than a year into the 10-year prison term.

Opening Myanmar’s defense, Suu Kyi said, “Gambia has placed an incomplete and misleading picture of the factual situation in Rakhine state in Myanmar.”

“Surely, under the circumstances, genocidal intent cannot be the only hypothesis,” she told the panel of 17 judges.

Gambia’s legal team provided a photograph of Suu Kyi with three smiling generals who are also Myanmar government ministers. The lawyers argued that the picture is an evidence of her close ties to the military.

“All that The Gambia asks is that you tell Myanmar to stop these senseless killings, to stop these acts of barbarity that continue to shock our collective conscience, to stop this genocide of its own people,” Gambian Justice Minister Abubacarr Tambadou told the judges.

The final ruling on genocide may be years away, though.

A United Nations fact-finding mission has previously found that “the gravest crimes under international law” have been committed in Myanmar and called for genocide trials.

The International Criminal Court (ICC) recently approved a long-awaited full investigation into the crimes against the Rohingya minority.

The Rohingya have inhabited Rakhine State for centuries, but the state denies them citizenship.