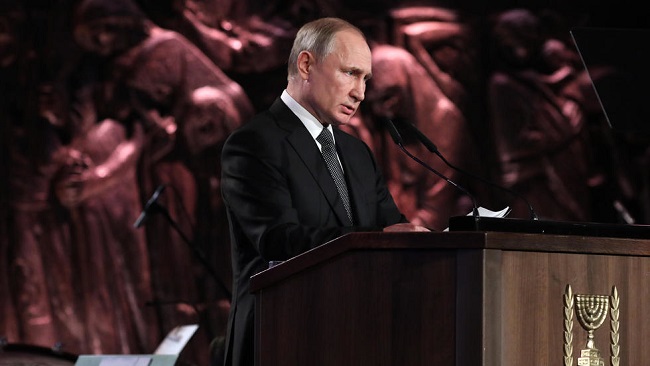 Russia: Putin backs amendment allowing him to stay in power beyond 2024 0

Russian President Vladimir Putin on Tuesday backed a proposed constitutional amendment that would allow him to seek re-election after his current term ends in 2024, ending uncertainty about his future.

Putin gave his support to the amendment put forward by lawmaker Valentina Tereshkova, who as a Soviet cosmonaut in 1963 became the first woman to fly to space. She proposed either scrapping Russian’s two-term limit for presidents or resetting the clock so Putin’s four terms wouldn’t count.

Lawmakers in the Kremlin-controlled State Duma quickly endorsed Tereshkova’s proposal, along with a sweeping set of constitutional changes proposed by Putin.

In a speech to lawmakers Tuesday, Putin spoke against scrapping presidential term limits altogether but backed the idea that if the constitution is revised, the two-term limit only would apply from 2024 on. The president’s current six-year term expires in 2024.

Putin, 67, has been in power for more than 20 years, becoming Russia’s longest-serving leader since Soviet dictator Josef Stalin. After serving two presidential terms in 2000-2008, he shifted to the Russian prime minister’s office while protege Dmitry Medvedev served as a placeholder president.

Putin reclaimed the presidency in 2012 and won another term in 2018.

A series of constitutional amendments Putin proposed in January were widely seen by Kremlin foes as part of his efforts to stay in power. However, it wasn’t clear until Tuesday how Putin could achieve that goal.

Observers had speculated that Putin could use the changes to scrap term limits; move into the prime minister’s seat with strengthened powers; or continue calling the shots as the head of the State Council.

He rejected all those options and finally revealed his cards Tuesday after Tereshkova, a legendary figure widely revered for her pioneering space flight, offered her ideas.

“I propose to either lift the presidential term limit or add a clause that after the revised constitution enters force, the incumbent president, just like any other citizen, has the right to seek the presidency,” she said to a raucous applause.

He said he was aware of public calls for him to stay on as preisdent and emphasized that Russia needs stability above all.

“The president is a guarantor of security of our state, its internal stability and evolutionary development,” Putin said. “We have had enough revolutions.”

However, he said that since the constitution is a long-term document, scrapping the term limit wasn’t a good idea.

Then he dropped the bombshell, saying he positively viewed Tereshkova’s alternate proposal to restart the term count when the revamped constitution enters force.

“As for the proposal to lift restrictions for any person, including the incumbent, to allow running in elections, this option is possible,” Putin said.

He added that the Constitutional Court would need to judge if the move would be legal, although the court’s assent is all but guaranteed.

Putin’s statement came as lawmakers were considering the amendments in a crucial second reading when changes in the document are made.