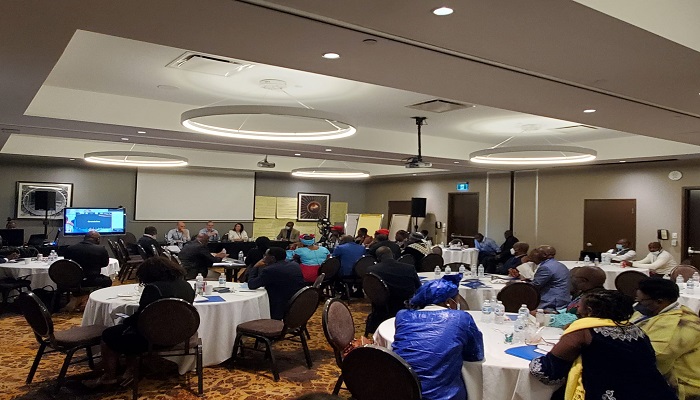 The Toronto meeting is finally over, with warring factions and stakeholders agreeing on key issues and the way forward.

The meeting, which brought together representatives of various groups in the Diaspora and on Ground Zero, has ended its deliberations and below is the official statement from THE COALITION FOR DIALOGUE AND NEGOTIATIONS (CDN)

Leaders and stakeholders of the Southern Cameroons met for a High-Level Leadership Retreat held from October twenty nine to November first, two thousand and twenty- one;

Reiterating their firm determination to ensure that the aspirations of the people of the Southern Cameroons are realized, through dialogue and internationally mediated negotiations that address the root causes, agreed as follows:

1. Improve Dialogue and Collaboration within the Leadership of the Struggle

The leaders and stakeholders recognizing the strength in diversity and collective engagement, oneness,

-Work together to build trust, respect, tolerance, and courtesy as we work towards consensus.

-Commit to a memorandum of understanding (MoU) on Communications etiquette and the use of social media that would be elaborated.

-Promote the right of children to education, including through community schools.

-Recognize the importance of collective engagement in matters of negotiations founded on trust.

-Accept to explore and enhance avenues to build a team for internal and external negotiations.

-Create space to build from their different strategies to engage in external negotiations as one entity, representing the people of the Southern Cameroons and their ultimate interest.

The leaders and stakeholders discussed the ongoing Switzerland-led facilitation process and the lack of progress and commitment from the Government of Cameroon and agreed to:

-Work together to ensure international mediations are credible.

-Engage in an effort to improve the internationally mediated process facilitated by the Government of Switzerland, including adding like-minded partners. reconvene to reassess progress in alignment with the collective aspiration of the people of the Southern Cameroons.

While the leaders and stakeholders are working on the elaboration of the resolutions of the retreat, they collectively applauded the Coalition for Dialogue and Negotiations (CDN) for providing the space for these frank discussions and committed to work with the CDN to build synergy. They called on the CDN to facilitate another meeting within the shortest possible time to discuss more substantively on the relevant issues raised in this retreat.

THE COALITION FOR DIALOGUE AND NEGOTIATIONS (CDN), IS A UNITED STATES BASED INTERNATIONAL NON-GOVERNMENTAL ORGANIZATION (NGO) WHOSE GOAL IS TO FACILITATE DIALOGUE AND SEEK A NEGOTIATED RESOLUTION AND AN END TO THE CONFLICT IN THE SOUTHERN CAMEROONS