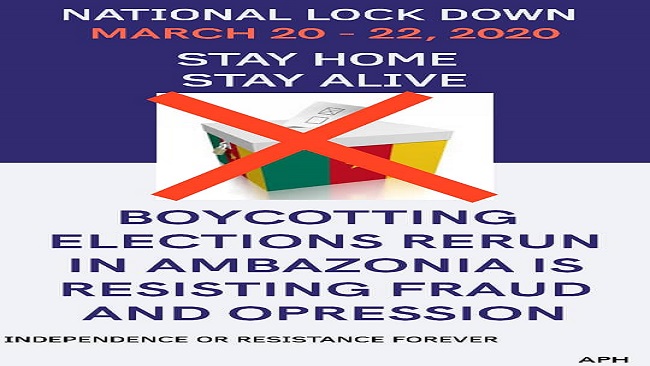 The Ambazonia Interim Government of Southern Cameroons-controlled English speaking regions have announced a decision to boycott Cameroon’s re-run parliamentary elections to be held from March the 20th to the 22nd.

87 year old President Biya has already called for a re-run of the parliamentary elections, according to a statement issued by the Etoudi presidency.

Speaking to Cameroon Concord News Group, Ambazonia Communications Secretary, Milton Taka said, “The people of Southern Cameroons reject these elections of the French Cameroun parliament and officially declare that they won’t let the elections be held in the Federal Republic of Ambazonia.”

Milton Taka added that since the independence of Southern Cameroons was declared by the Ambazonia leader President Sisiku Ayuk Tabe, the territory now known as the Federal Republic of Ambazonia is out of Mr. Biya’s control and Ambazonians have nothing to do with Biya French Cameroun’s elections.

Vice President Dabney Yerim said, in a statement issued last week that the election boycott comes as the French Cameroun regime is practicing daily killings against the Ambazonian people alongside the continuing campaigns of repression, persecution, arrest, as well as the burning of towns and villages and the demolition of houses belonging to innocent Southern Cameroons civilians.

“The Ambzonia Interim Government announces the boycott (voters and candidates) of the elections scheduled to take place by the dictatorial French Cameroun regime,” the statement said.

For his part, the Southern Cameroons Secretary for Finance, Comrade Tabenyang Brado noted that the French Cameroun regime’s insistence on holding the parliamentary elections re-run is a challenge to the will and efforts of the international community in stopping the ongoing genocide in Ambazonia, and it is a clear attempt by the Biya administration to pervert the course of the Washington Conference on peace negotiations.

This is the third time Southern Cameroonians have boycotted the Biya French Cameroun regime’s elections.