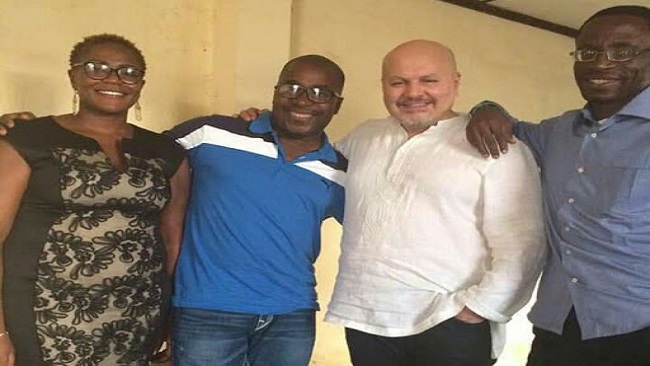 More than 120 countries elected British lawyer Karim Khan on Friday as the next prosecutor of the International Criminal Court, one of the toughest jobs in international law because the tribunal seeks justice for the world’s worst atrocities — war crimes, crimes against humanity and genocide.

His election on the second secret ballot by the 123 parties to the Rome Statute that established the court ends a drawn-out and divisive process to replace Fatou Bensouda when her 9-year term expires in June.

Khan, who has specialized in international criminal law and international human rights law, was widely seen as the favourite to get the job. But neither he nor any of the other candidates garnered enough support to be appointed by consensus, prompting Friday’s election in the U.N. General Assembly Hall.

When Michal Mlynár, vice-president of the court’s Assembly of State Parties, announced that Khan had won, a smattering of applause broke out in the hall, where masked diplomats had voted one by one, putting ballots into spaced out boxes because of COVID-19 restrictions.

Khan received 72 votes, far more than the majority needed, Fergal Gaynor of Ireland was second with 42 votes followed by Spain’s Carlos Castresana Fernandez with 5 votes and Francesco Lo Voi of Italy with 3 votes. One member did not vote.

Khan is no stranger to the International Criminal Court, known as the ICC, having acted as a defence lawyer for Kenyan Deputy President William Ruto and persuading judges to throw out prosecution charges against his client. Gaynor acted as a legal representative for victims in the Ruto case, which focused on post-election violence.

Khan also served as counsel for Seif al-Islam Gadhafi, the son of the late Libyan dictator Moammar Gadhafi, who is still being sought by the ICC on charges of crimes against humanity.

“Karim Khan’s election as prosecutor is occurring at a time when the ICC is needed more than ever but has faced significant challenges and pressure on its role,” said Richard Dicker, international justice director at Human Rights Watch. “We will be looking to Mr. Khan to address shortcomings in the court’s performance, while demonstrating firm independence in seeking to hold even the most powerful rights abusers to account.”

The Rome Statute which established the court was adopted on July 17, 1998 and it entered into force on July 1, 2002, with a mandate to prosecute war crimes, crimes against humanity and genocide — but it only steps in when domestic courts fail to initiate their own investigations and prosecutions. Its 123 state parties are bound by its provisions, which include arresting all those sought by the court.

While the Security Council has used its power under the Rome Statute to refer conflicts in Sudan’s western Darfur region and in Libya to the ICC, calls for the U.N.’s most powerful body to refer Syria, and more recently Myanmar, to the tribunal have failed.

Dicker said in an interview that “the court in 18 years has established itself as the permanent address for accountability for the most egregious crimes.”

In the last several years, Bensouda has sought to broaden its reach beyond its early all-African focus including Afghanistan, Palestine, which is a party to the Rome Statute, and Georgia.

The ICC is needed more than ever, he said, “because of the proliferation of these horrific crimes,” but the court has faced “an existential threat” from former U.S. President Donald Trump’s administration.

It slapped sanctions on Bensouda and one of her top aides last year for continuing to investigate war crimes allegations against Americans, although the court was often criticized in the past for its focus on African crimes.

Last week, ICC judges angered Israel by saying the court’s jurisdiction extends to territories occupied by Israel in the 1967 Mideast war, potentially clearing the way for the prosecutor to open an investigation into Israeli military actions and the country’s construction of settlements in the occupied West Bank and annexed east Jerusalem.

Dicker said the ICC’s challenges include addressing some poor judicial decision-making and having a docket too large for its current staffing.”

The selection process for the prosecutor and the alleged failure by the ICC’s Assembly of States Parties to conduct stringent background checks on the candidates to ensure they met the requirement of “high moral character” has drawn criticism from civil society groups that work with the court.

A diplomat who spoke on condition of anonymity to discuss details of closed meetings said the fact that many of the meetings to discuss possible successors to Bensouda took place virtually made it difficult for member nations to discuss concerns during informal “corridor” meetings.