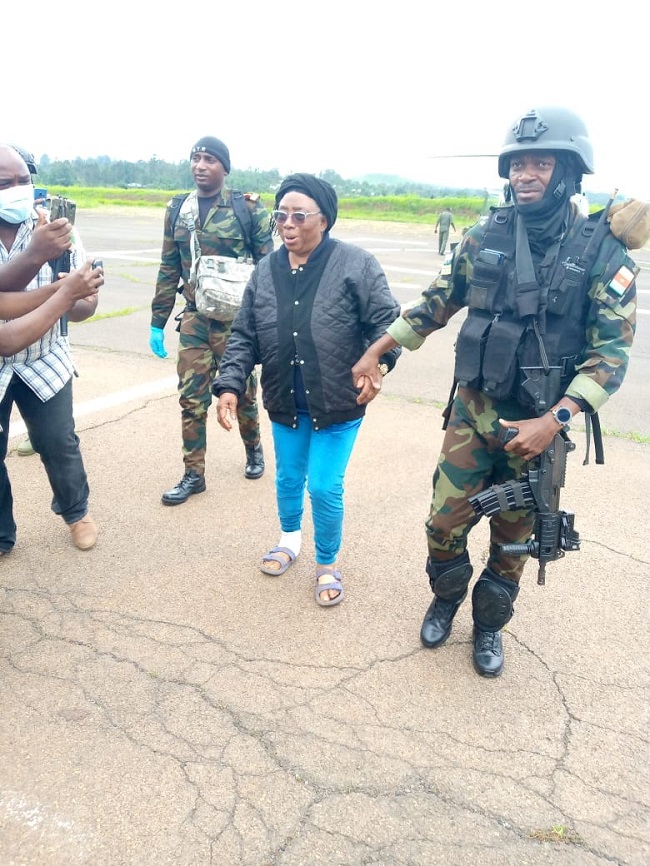 Senator Regina Mundi has been freed from AGOVC captivity, Cameroon Concord News has gathered from several administrative sources in Bamenda and Batibo.

There are conflicting reports on the circumstances which led to her release. However, Cameroon government military spokesperson Cyrille Serge Atongfack Guemo in a statement said she was freed during an operation carried out by troops loyal to the regime in Yaoundé in the locality of Ashong, Batibo, Momo Division, North West Region.

Serge Atongfack added that some members of the Cho Ayaba armed gang were trying to escape with several hostages during the heavy exchange of fire.

Cameroon Concord News understands the population which is becoming hostile towards AGOVC criminal gangs provided the intelligence to the military and the operation finally led to the release of Senator Elisabeth Regina Mundi including several other hostages.

A revolution which started so nicely has been hijacked by some criminal elements led by one Cho Ayaba Lucas.

Today, it has become a war wherein some people are using to settle scores and those who express contrary views get blackmailed, threatened or even get their online accounts hacked just to cook up stories about them.

This is not how the revolution was conceived. It was designed to bring about dignity, a sense of responsibility in the two English-speaking regions of the country and foster unity among Southern Cameroonians.

But the revolution has clearly lost its way. Schools are still closed in rural parts of Southern Cameroons and rogues and illiterates have become judges and law enforcement agents in that part of the country.

Senator Mundi is a Southern Cameroonian and she has a right to her political opinion. Cameroon has been designed in a peculiar way and only Mr. Paul Biya can make meaningful decisions regarding major political issues.

The fear these days is that Southern Cameroonians will be killing each other because of ideological divergences and many young men who sincerely want to fight for the total independence of Southern Cameroons might quit the fight.

The Ambazonia Interim Government under Vice President Dabney Yerima should reexamine their strategy. This action of the so-called AGOVC-ADF gangs is not helping the revolution. They know who they should be fighting. Killing and kidnapping other Southern Cameroonians is a disease that is heralding the death of the revolution.