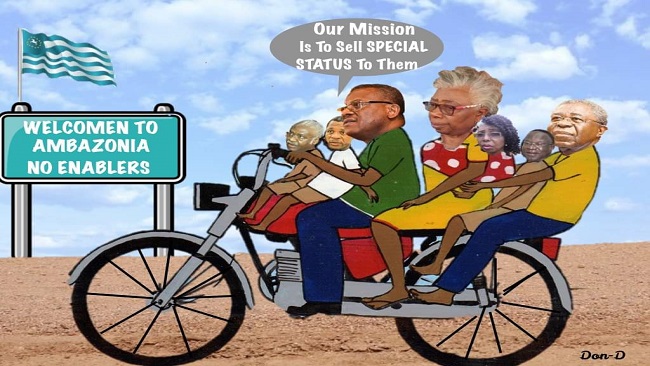 For more than three years, Cameroon has been in the spotlight for all the wrong reasons. The country, which was once considered as an oasis of peace in a desert of chaos, finally stole the show from its chaotic neighbors in 2016 following protests by English-speaking lawyers and teachers against years of marginalization and discrimination.

The government’s response to the protests was at best barbaric. Indeed, it made things worse as it caused the population of the two English-speaking regions to join the protests which really turned ugly in 2017. Students, mechanics, nurses, doctors and other socio-professional bodies joined the protests without invitation. A sign that the frustration really ran deep.

As the government sought to restore order, it unleashed its forces of law (lessness) and (dis) order on the people of Southern Cameroons and in the process, these unprofessional “dogs of war” committed despicable atrocities. They killed thousands of innocent civilians, burnt down more than 250 villages and roasted some old and disabled people who could run away for their dear lives.

The military really ran amok in the region and it has continued to do even after the much-touted Major National Dialogue that has not earned the recognition of major countries like the United States, Canada, Germany and the United Kingdom.

The sex-starved and alcohol-inflamed soldiers demonstrated how evil humans could be if given the opportunity.  The evil they unleashed on innocent civilians only made it possible for them to incur the wrath of the Southern Cameroonian Diaspora which quickly took over things and manufactured a nightmare for a government whose barks are more dangerous than its bites.

The old tactics, which were used on East Cameroonians in the 1960s, failed to produce the desired effects in Southern Cameroons. The world has walked away from many outdated ways, but the Yaounde gerontocracy is still stuck in the past. It felt old methods would deliver fast results. Its failure to see the writing on the wall turned out be its greatest undoing.

The 4-million-strong Southern Cameroonian Diaspora’s entry into the situation was a clear game-changer. The Diaspora has the financial resources to make a huge difference and it has successfully made that difference. It has been holding the government by its balls and this is really hurting. Cameroon will never be the same.

The government has woken up to the realization that it cannot control its Diaspora. If it needs the Diaspora to support its development efforts, it must prioritize dialogue over brutality. It must also rethink its 1968 law on dual nationality.

The fighting in the two English-speaking regions of the country has caused the country’s economy to take a nosedive. Major state corporations such the CDC, PAMOL and SONARA have been pushed into bankruptcy. Rebuilding these companies will require a lot of money and even the American Federal Reserve many not be big enough to solve Cameroon’s economic and financial problems.

The Diaspora’s successful professionals living in countries such as Canada, the United Kingdom, Germany, and the United States have organized themselves and they are doing a great job to draw the world’s attention to a case of legendary incompetence, devilishness and corruption. And countries such as America and Canada have noticed them and are prepared to mount pressure on the Yaounde government that is already cracking.

The Diaspora has huge and genuine grudges against a government that is averse to dialogue. Its ideal conflict management tools have remained intimidation and corruption which have, unfortunately, left it with a huge crisis on its hands. The Diaspora wants change in Cameroon, and it knows that will not come through the ballot boxes. It is therefore using its financial and political leverage abroad to keep the Yaounde government awake all night.

The Yaounde government is not popular among Southern Cameroonians, especially those in the Diaspora who blame their long exile on a regime that has failed to work in the interest of the people and the country, and this has caused a lot of distrust in the country. Any statement from the government is taken with a pinch of salt.

The international community is also aware of the confidence deficit in Cameroon. After 37 years of dismal economic and political performance, it is but normal to be suspicious of a government that has been manufacturing figures at every election.

Despite the government’s inability to inspire confidence both at home and abroad, the international community still wants to work with it to resolve the Southern Cameroons crisis which is in its fourth year and has resulted in more than 3,000 deaths and the displacement of more than a million people.

The international community has been calling for an inclusive dialogue for years as a sure means of peacefully addressing a conflict that has the potential of spilling into neighboring countries. But the manipulative government has instead come up with a major national dialogue which has not delivered any meaningful results.

The national dialogue, a product of the ruling CPDM, was chaired and micro-managed by the president’s henchmen who did all they could to control everything. Government allies were invited to the dialogue while the real people who should have attended the event were tactfully kept out. Separatists, the enterprising Diaspora and top-notch professionals never got invited and this simply voided whatever recommendations and resolutions that were taken during the dialogue.

The government, noted for its manipulation, produced its own Diaspora and manufactured separatist fighters from among its prisoners. These prisoners were made to spew out whatever the government wanted to hear. But those who took the risk of openly aligning with the government knew they were running a huge risk.

Ambazonians and their fighters are not people who should be taken lightly. They had disapproved of the sham called national dialogue. Everybody knew that those who had attended the dialogue were doing so at their own.

The Yaounde government is not noted for protecting those who help it to stage its drama. And a few days later, some of those who passed off as Ambazonian fighters were targeted and killed. The government has once more proven that it does not care about the lives of those who come to help it achieve its unrealistic goals. It simply dumped them like used Kleenex tissues after the so-called national dialogue.

Today, it has come up with something new to distract the population. In Yaounde, the noise is about “Special Status” for Southern Cameroonians. Some government officials now sell it as a mark of the president’s magnanimity and determination to solve a problem he never acknowledged that it existed.

But the 1996 constitution clearly speaks about special status for some regions if the need arises. This article of the country’s constitution should simply be applied without any CPDM comedy. Today, there are delegations being rushed to Southern Cameroons to sensitize the population on the so-called special status.

But will that address any issue? Southern Cameroonians do not want anything short of federalism. Though many would opt for a complete separation from East Cameroon if given the opportunity, they will however settle for a full-blown federation that will enable them to take ownership of their own systems and institutions like they did before reunification in 1972.

The special status may instead infuriate many in the two regions and all those sent to sensitize the population are people who have already been rejected by the angry population. The government believes that it is doing the people a favor, but it fails to understand that its so-called special status might only trigger a new cycle of violence in the region. Those heading to the region to sell a product whose contents have already been rejected know that they will not be able to convince anybody. The project is clearly dead on arrival.

While seeking to sell this “poisoned gift”, the government is also preparing for parliamentary and municipal elections. How can such elections take place in a region that is awash with guns and soldiers are still killing innocent people?

Why can the government not wait to see if its poisoned gift would be accepted by the population before calling for elections? Has it forgotten that Ambazonian fighters would not tolerate any elections in their regions? Has it forgotten that the ruling CPDM has been outlawed in Southern Cameroons and its supporters such as Prof. Elvis Ngolle Ngolle, Prime Minister Yang Philemon, Prime Minister Dion Ngute, Senator Tabetando and many others have been sent into exile by their people for their questionable behavior?

The government should engineer new ways of communicating with the people if it really wants to sell its poisoned gift. Those taking that message to the people may not return to Yaounde in one piece as the population has rejected them and the Ambazonian fighters are seeking to make an example of them if caught.

The government should instead focus on the Canada-sponsored Swiss initiative that has been endorsed by many of the warring factions in Southern Cameroons. The preliminary meetings held in the Swiss capital went on well and many groups accepted the terms and conditions. Even human rights groups that attended the meetings hold that the Swiss initiative holds out more hope than the hastily assembled major national dialogue that leaves much to be desired. If the fire must be doused, the government must embrace news ways. Old ways will not deliver the right results. They clearly belong to the past.