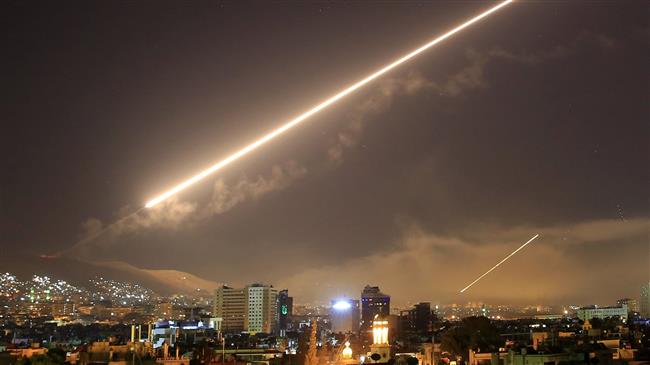 Syria strike nothing but ‘political theater’ 0

The recent airstrikes against Syria were nothing but “political theater” orchestrated to please the Deep State in Washington, which has been trying to remove President Donald Trump from office, says a writer and analyst in Indiana.

“The question here is, what was the mission?” asked Dr. E Michael Jones, editor of Culture Wars magazine.  “The attack on Syria did not change anything on the ground. It was an elaborately orchestrated piece of political theater.”

On Saturday morning, President Trump declared “Mission Accomplished!” in a tweet about the airstrikes he had earlier ordered against Syria in response to a suspected chemical weapons attack outside Damascus last week.

Trump’s declaration was widely seen as premature and narrow-minded, an echo of former President George W. Bush landing on an aircraft carrier to declare “mission accomplished” in Iraq 15 years ago.

“The mission from Donald Trump’s point of view was to stay in office, to protect (himself) from the Deep State which has been trying to remove him for two years now,” Jones said.

“The strategy here is to do everything you can to foster the power of the Israel lobby, and Israel and the Jews in the United States,” he added. “The Jews are Trump’s only hope to stay in office. So that was his mission accomplished.”

The US reportedly notified Israel ahead of the missile strikes in Syria.

“The second part of this was of course the Deep State’s mission which was to keep the United States troops in Syria,” Jones said, adding that this “whole play of political theater” began when Trump said he was going to pull American troops out of Syria.

“This is what provoked the false-flag gas attack” in Douma, he noted. “And now the US troops are going to stay in Syria.”

Late last month, Trump announced that the US would withdraw from Syria “very soon,” just hours after the Pentagon highlighted the need for American troops to remain in the country.

“We will be coming out of Syria, like, very soon. Let the other people take care of it now,” Trump said during a speech in Ohio.