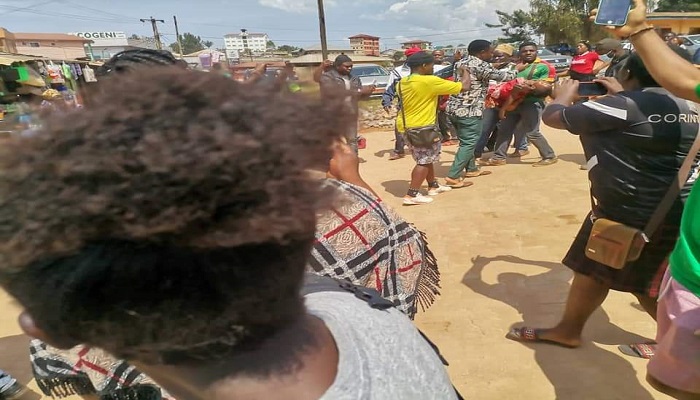 Yesterday, Friday 12 November 2021, an armed rogue, Fagha Alain, employed by the crime syndicate in Yaoundé, opened fire on a vehicle at New Road Nkwen Bamenda, Northern Zone of Ambazonia, killing a seven-year-old toddler, Tataw Brandy. Brandy was on her way from school at about 1 pm local time, and she had a long and abundant life ahead of her. At this challenging time, the thoughts, and prayers of the Ambazonian people are with young Brandy’s family.

French Cameroun has a well-attested history, returning to the 1970s of assassinating children in the Southern Cameroons (Ambazonia). Yesterday’s shocking murder follows a long line of other cowardly assassinations by Biya’s hired assassins going around in army fatigues. This latest execution comes barely one month after a Gendarme shot dead 5-year-old Caro Ndialle in Buea.

Yesterday’s shooting has brought to light the truth about last year’s assassination of school children in Kumba and several other cases of the slaying of children in our Homeland by Mr Biya’s terrorist colonial troops. Biya and his tribal regime lack the courage to take responsibility for their cruel crimes in each case, and deception is their stock in trade.

The Interim Government of Ambazonian condemns these war crimes in the strongest terms possible. We extend profound gratitude to the people of Bamenda who came out in their numbers and protested forcefully in the face of this barbarism and intimidation. When writing this statement, three other Southern Cameroonians were attacked by trigger-happy La Republique du Cameroun forces as they marched to the colonial governor’s office with the lifeless body of Tataw Brandy. The Interim Government of Ambazonia is calling on the people of the Northern Zone of Ambazonia to continue with demonstrations and protests over the coming days.

As a government, our position on schools has not changed. We have publicly observed that only parents can determine if the conditions are conducive for Southern Cameroons children to go to school. The Interim Government wants children to study in a safe and peaceful environment, not where Biya’s marauding assassins put children in harm’s way.

French Cameroun is a nation that has no respect for human lives and international norms. But we must continue our fight for freedom and justice with the belief that we shall overcome. We must remain bold and not succumb to intimidation or fear.

Thank you, God bless the little soul of Brandy Tataw. God Bless You All.