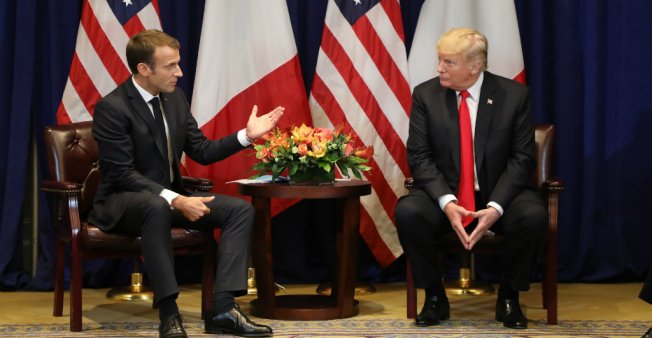 Emmanuel Macron and Donald Trump sought common ground on points of contention when they met Monday evening in New York on the sidelines of the United Nations General Assembly, France’s Elysée Palace said.

Meeting for almost an hour, the French and US presidents discussed a range of topics including Syria, Iran and disagreements over trade.

Trump said before the conversation that the two men have had “some very good experiences” but acknowledged, “On occasion not so good, but 99 percent very good.”

With US Vice President Mike Pence and the countries’ respective diplomacy chiefs looking on, the French and American leaders shook hands twice before the cameras, the gestures noticeably less effusive on this occasion than they have been during past encounters between the two presidents.

“We are here to obtain results,” said Macron, citing areas including security, the fight against terrorism and the Middle East.

A source close to the French presidency told Agence France-Presse that there are “differing points of view” between Washington and Paris on certain issues “but more on the approach and the method than on the objectives”. The source noted that “there are no new issues of confrontation” compared to last year’s annual United Nations gathering.

Trump is expected to visit France in November to commemorate the centenary of the end of World War I. Macron and Trump will each address the UN General Assembly on Tuesday morning in New York.