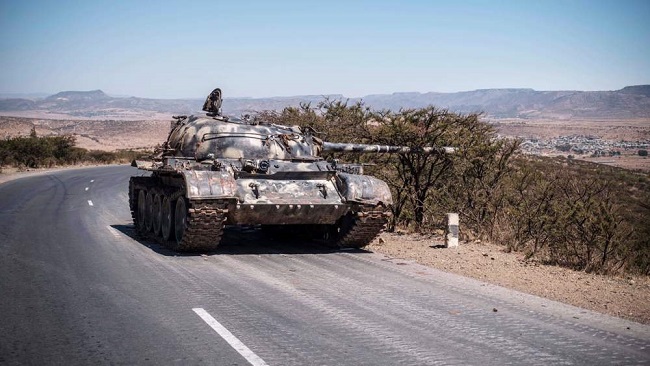 The United Nations Security Council has expressed “deep concern” over the escalation of fighting in Ethiopia, calling for a ceasefire and the initiation of peace talks in the restive northern region of Tigray.

“The members of the Security Council expressed deep concern about the expansion and intensification of military clashes in northern Ethiopia,” the 15-member body said in a joint statement on Friday.

“They further called to put an end to hostilities and to negotiate a lasting ceasefire and for the creation of conditions for the start of an inclusive Ethiopian national dialogue to resolve the crisis.”

The council also expressed concern over the humanitarian situation and national stability, and “reaffirmed their strong commitment to the sovereignty, political independence, territorial integrity and unity of Ethiopia.”

A public meeting of the United Nations Security Council on the Ethiopia issue is set to be held on Monday.

The UNSC issued the statement as members of the rebel Tigray People’s Liberation Front (TPLF) have threatened to march on the capital Addis Ababa, a year into the fighting, prompting Ethiopia to declare a six-month state of emergency.

Tigray has been the scene of conflict since November 2020, when Prime Minister Abiy Ahmed sent troops there to topple the TPLF in response to attacks on army camps.

Three weeks later, the government declared victory when it gained control of the regional capital, Mekelle. However, the TPLF forces resumed fighting later and retook Mekelle and most of Tigray at the end of June after the government withdrew its soldiers and declared a ceasefire.

The fighting has continued since then.

The conflict between Ethiopian troops and TPLF has raised fears of a more devastating humanitarian crisis in a region the United Nations says is already in the grip of famine following a yearlong conflict.

Tigray is under a de facto blockade that is preventing most aid from getting in, according to the UN. Ethiopian authorities and the TPLF have blamed each other for obstructing deliveries. Ethiopian officials also accuse the international community of ignoring alleged abuses by the TPLF.

The conflict in Tigray has killed thousands of people and pushed 400,000 people to the brink of famine, according to analyses by UN agencies and aid groups. Ethiopia’s government, however, has disputed those claims.

Abiy’s government has faced criticism over the conflict, notably from the US, a longtime ally, with President Joe Biden signing an executive order allowing for sanctions against the warring parties if they fail to commit to a negotiated settlement.

In a separate development on Friday, the US embassy in Addis Ababa called on Americans to leave Ethiopia “as soon as possible” over fears of a rebel advance on the capital.

The US embassy warned in an advisory that, “the security environment in Ethiopia is very fluid.”

It urged “citizens who are in Ethiopia to leave the country as soon as possible.”

The TPLF said Wednesday that its fighters had reached the town of Kemissie in the Amhara region, 325 kilometers northeast of the capital, and were running “joint operations” with the so-called Oromo Liberation Army (OLA), which predicted Addis Ababa could fall in a matter of weeks.

The Ethiopian government dismissed rebel claims of territorial gains, saying on Thursday that the TPLF was “encircled” and close to defeat.

The TPLF and the OLA were officially designated as terrorist groups by the government in May.