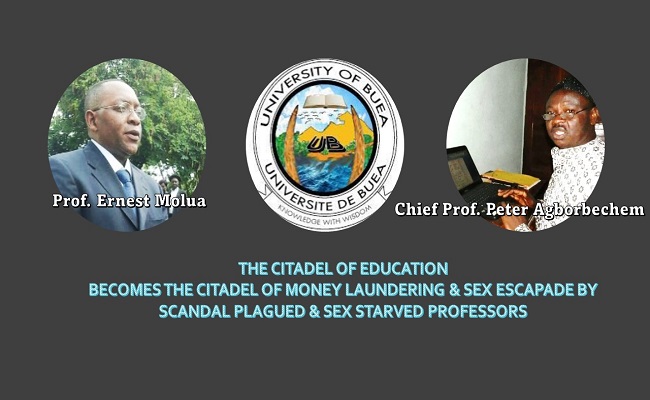 When changes were made a few days ago at University of Buea in the Southwest region of Cameroon, many people in the two English-speaking regions wondered why some of the university dons had been replaced.

But before the dust triggered by those changes, especially the replacement of the University of Buea former registrar, Dr. Ernest Molua, and the former Head of Department of Education and Curriculum Studies, Prof. Peter Agborbechem, could settle, the Vice Chancellor of the University of Buea, Prof. Ngomo Horrace Manga, published a press release announcing that there were investigations into allegations that university lecturers were engaging in inappropriate conduct by requesting money from the students in order to give them marks.

According to some of their victims, both men seem to be possessed by some demons. Sex seems to be like food to them. It appears to be part of their benefits package. But Sources at the registrar’s office have informed the Cameroon Concord News Group that sex is not part of the university’s benefits package and if Ernest Molua and Peter Agborbechem thought they were entitled to free sex, then they were mistaken. Their long-running sex-party and impunity have been ended by a vice chancellor who is more concerned about the image of the institution he runs.

“The University’s vice chancellor has decided to shut down the harem and Ernest Molua and Peter Agborbechem can take their madness to somewhere else. They have been demoted and if they are not happy, they can resign and leave the university. These men have given our university a very bad name. How can educated men transform sex into food?” our source quipped.

“All the motels and small hotels in Buea know both men. They have been exploiting these female students for a long time. These young Cameroonians have been entrusted to the University for It to empower them through sound education, but Agborbechem and Molua have been having a never-ending sex party. This sex drama in the University of Buea is like telling a fox to take care of a poultry. These men do not deserve to be within a university environment. They have hurt so many girls and many people in Buea are only too happy that they have been caught but will they walk away from their bad and old ways when they are still teaching in the same university?” the source asked.

“I don’t know what will follow next, but we understand that there is a disciplinary process that is currently underway to determine the extent to which both men have damaged the university’s reputation. These men must be sick. They should be made to see a psycho-therapist. I have always thought that it is impossible to fall in love with any and every woman but Agborbechem and Molua have proven that it is possible. They sleep with any and everything. This has been going on for years and because the past vice chancellors of the university protected these men, they have continued to act with impunity,” the source said.

“But Karma has started cutting them down to normal human proportions. Some of the girls are willing to testify if the university decides to carry out a full investigation. Some say they were humiliated by Molua and Agborbechem and that they want to take revenge on these predators who are preying on young girls in the university. The girls, who have asked to be anonymous for now, have clearly said that they would provide a graphic description of what both men do when female students go to their offices for academic assistance,” the source concluded.

The Cameroon Concord News Group has dispatched a correspondent to the University of Buea where details regarding this misconduct must be uncovered. The Group will be requesting for an opportunity to interview the university’s vice chancellor who many say is currently doing a good job by introducing major reforms that are very likely to transform the university into a true citadel of knowledge.