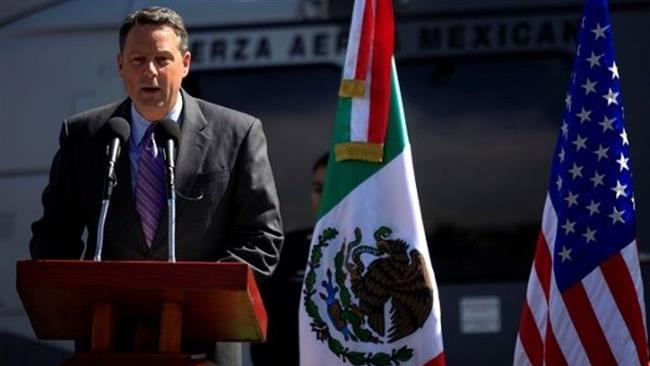 US ambassador to Panama resigns, says he cannot serve Trump 0

US Ambassador to Panama John Feeley has resigned, saying he no longer felt able to work for President Donald Trump.

Feeley, a former Marine Corps helicopter pilot, had informed the US State Department about his departure on December 27, US officials said.

His resignation was not a response to Trump’s alleged use of the word “shithole” to describe Haiti and African countries at a meeting on Thursday, reports said.

Feeley, among the State Department’s most senior officers and a Latin America specialists, said his decision was clearly prompted by differences with the Trump administration.

“As a junior foreign service officer, I signed an oath to serve faithfully the president and his administration in an apolitical fashion, even when I might not agree with certain policies,” Feeley said, according to an excerpt of a resignation letter.

“My instructors made clear that if I believed I could not do that, I would be honor bound to resign. That time has come.”

A State Department spokeswoman confirmed Feeley’s departure, saying he will retire on March 9 of this year.

Under Secretary of State Steve Goldstein said the ambassador was leaving for “personal reasons” and was not related to Trump’s alleged use of the vulgar term.

“Everyone has a line that they will not cross,” Goldstein told reporters at the State Department. “If the ambassador feels that he can no longer serve … then he has made the right decision for himself and we respect that.”

Much of Feeley’s long career was spent working on Latin American issues. Some of Trump’s policies have been widely regarded within the region as hostile to Central and South America.

During the meeting at the White House on Thursday, Trump reportedly asked why “people from shithole countries come to” the United States.

His contemptuous comments, which were about immigrants from El Salvador, Haiti and African countries, have provoked sever criticism in the US and abroad.

The administration has been rocked by a series of high-profile exits — including Sean Spicer as press secretary, James Comey as FBI director, Anthony Scaramucci as communications director and Steve Bannon as chief strategist— since Trump took office.