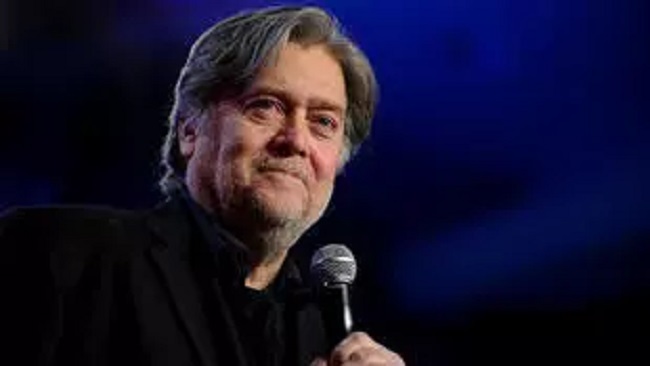 Former White House adviser Steve Bannon was arrested Thursday on charges that he and three others committed fraud as part of an online fundraising campaign to build US President Donald Trump’s Mexican border wall.

Federal prosecutors in Manhattan announced that Bannon had been charged in an unsealed indictment for allegedly defrauding hundreds of thousands of donors through a $25 million crowdfunding campaign called, “We Build the Wall.”

The donors thought the money would go towards helping to build a border wall along the frontier with Mexico, prosecutors said.

According to the indictment, Bannon promised that 100 percent of the donated money would be used for the project. But the three men are accused of collectively using hundreds of thousands of dollars in a manner inconsistent with the organisation’s public claims. Kolfage, whom prosecutors described as the public face and founder of the operation, allegedly received thousands of dollars that he used to fund a lavish lifestyle.

However, after calling the effort a “volunteer organisation”, Bannon received more than $1 million of the donations, which he funneled through a non-profit he controlled, prosecutors said, using some of it for his personal expenses.

The indictment said they faked invoices and used sham “vendor” arrangements, among other methods, to hide what was really happening with the money.

“Not only did they lie to donors, they schemed to hide their misappropriation of funds by creating sham invoices and accounts to launder donations and cover up their crimes, showing no regard for the law or the truth,” said Philip Bartlett, head of New York’s division of the US Postal Inspection Service, which worked on the investigation.

The initiative began in 2018 as a GoFundMe campaign to raise money that organisers said would go towards the border wall Trump had promised throughout his 2016 campaign, which Bannon led in its critical final months.

Before his role in the campaign, Bannon ran the conservative website Breitbart News. After Trump was elected, he moved on to a top White House strategy post.

The blunt-spoken, combative Bannon became the voice of an inflammatory nationalistic conservatism. He encouraged Trump to follow through on some of his most contentious campaign promises, including a controversial travel ban on some countries and the decision to pull out of the Paris climate change agreement.

But Bannon also clashed with other top advisers, and allegations that he was the power behind the throne irked Trump. He left the White House after falling out of favour in August 2017.