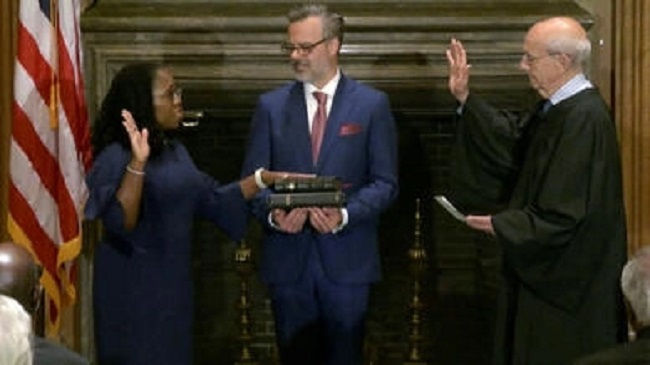 Ketanji Brown Jackson was sworn in on Thursday as a U.S. Supreme Court justice, making history as the first Black woman on the nation’s top judicial body while joining it at a time when its conservative majority has been flexing its muscles in major rulings.

Jackson, 51, joins the liberal bloc of a court with a 6-3 conservative majority. Her swearing in as President Joe Biden’s replacement for retiring liberal Justice Stephen Breyer came six days after the court overturned the 1973 Roe v. Wade landmark that legalized abortion nationwide. Breyer, at 83 the court’s oldest member, officially retired on Thursday.

“On behalf of all the members of the court, I am pleased to welcome Justice Jackson to the court and to our common calling,” Chief Justice John Roberts said at the ceremony.

A Reuters/Ipsos poll this week found that a majority of Americans – 57% – holds a negative view of the court following the abortion ruling, a significant shift from earlier in the month when a narrow majority held a positive view.

Jackson is the 116th justice, sixth woman and third Black person to serve on the Supreme Court since its 1789 founding.

Biden appointed Jackson last year to the U.S. Court of Appeals for the District of Columbia Circuit after she spent eight years as a federal district judge. Like the three conservative justices appointed by the Democratic president’s Republican predecessor Donald Trump, Jackson is young enough to serve for decades in the lifetime job.

The Senate confirmed Jackson on a 53-47 vote on April 7, with three Republicans joining the Democrats in support of her.

Jackson’s appointment does not shift the court’s ideological balance.

“It has taken 232 years and 115 prior appointments for a Black woman to be selected to serve on the Supreme Court of the United States,” Jackson said at an April 8 event celebrating her confirmation. “But we’ve made it – we’ve made it – all of us, all of us.”

Biden has aimed to bring more women and minorities and a wider range of backgrounds to the federal judiciary. Jackson’s appointment fulfilled a pledge Biden made during the 2020 presidential campaign to name a Black woman to the Supreme Court. With Jackson’s addition, the Supreme Court for the first time has four women on the bench.

Breyer in January announced his plans to retire, having served since being appointed by Democratic President Bill Clinton in 1994. Jackson served as a clerk for Breyer early in her legal career.

The court issued its final two rulings of its current term on Thursday. Jackson joins a liberal bloc that has found itself outvoted in major rulings this term, not only on abortion rights but on gun rights, expanding religious liberties and other matters.

Jackson will participate in arguments in cases for the first time when the court’s next term opens in October. One major case for the coming term gives the conservative justices an opportunity to end affirmative action policies used by colleges and universities in their admissions processes to increase their enrollment of Black and Hispanic students to achieve campus diversity.