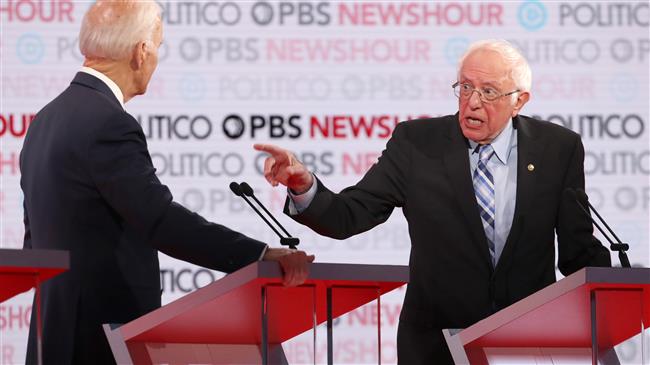 US Senator Bernie Sanders (I-Vt.) has opened a 12-point lead to former former Vice President and front-runner for the Democratic presidential candidates, Joe Biden, according to a new poll.

Sanders got 31 percent of the votes in the NPR/PBS NewsHour/Marist poll released early Tuesday, pushing him up to the top spot, which had belonged to Biden.

Sanders’s support has risen 9 points since last month’s poll, following his victory in the New Hampshire.

Biden’s support, however, has decreased 9 points, dropping to 15 percent in the new survey.

Bloomberg’s support increased by 15 points since last month’s poll. The billionaire, who is self-funding his campaign, also qualified for Wednesday night’s debate with his performance in the survey.

Sen. Elizabeth Warren (D-Mass.) had a 5-point decrease to 12 percent support, based on the new poll. Sen. Amy Klobuchar (D-Minn.) had a 5-point increase to 9 points in the wake of her third-place finish in the New Hampshire primary.

Former South Bend Ind, Mayor Pete Buttigieg, who appears to be leading the field in the delegate count, is closely trailing Klobuchar at 8 percent support, a 5-point decrease in one month.

No other candidates registered at more than 2 percent support.

The poll surveyed 527 Democrats and Democratic-leaning independents and was conducted between Feb. 13-16. There is a margin of error of 5.4 percentage points.

In the meantime, US President Donald Trump has once more accused the Democratic National Committee (DNC), which is the governing body of the Democratic Party, os plotting against Sanders.

The Crooked DNC is working overtime to take the Democrat Nomination away from Bernie, AGAIN! Watch what happens to the Super Delegates in Round Two. A Rigged Convention!

“The Crooked DNC is working overtime to take the Democrat Nomination away from Bernie, AGAIN! Watch what happens to the Super Delegates in Round Two. A Rigged Convention!” Trump tweeted.