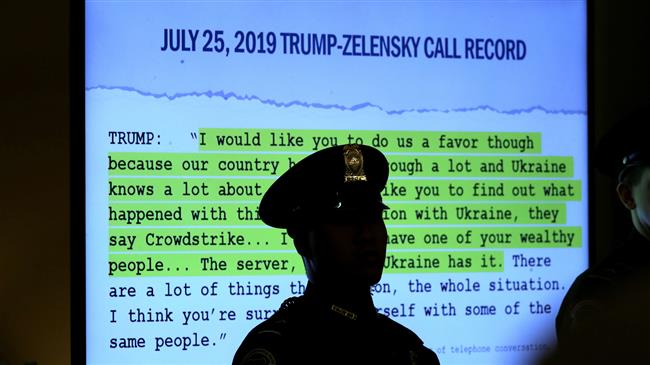 The administration of US President Donald Trump ordered the Pentagon to freeze $391 million of military aid to Ukraine less than two hours after the controversial phone call in which Trump asked his Ukrainian counterpart Volodymyr Zelensky to investigate former vice president Joe Biden, according to newly released internal emails.

During the July 25 call, Trump pressured Zelensky to investigate Biden, his potential opponent for the 2020 presidential election, and his son, Hunter, before Kiev can receive the US military aid.

Although administration officials previously said the president had ordered the Office of Management and Budget (OMB) to withhold aid to Ukraine as early as 12 July, a declassified White House memorandum documenting Trump’s call contradicts the officials’ accounts.

The papers show the call began at 09.03 a.m. and ended 30 minutes later and at 11.04 a.m., senior OMB official Michael Duffey sent an email to Defense Department officials ordering the Pentagon to stop making plans to give any security assistance funds to Ukraine.

“Based on guidance I have received and in light of the Administration’s plan to review assistance to Ukraine, including the Ukraine Security Assistance Initiative, please hold off on any additional DoD obligations of these funds, pending direction from that process,” wrote Duffey, associate director for national security programs.

“Given the sensitive nature of the request, I appreciate your keeping that information closely held to those who need to know to execute direction.”

The move, which legal experts say violated US law forbidding the president from “impounding” congressionally appropriated funds, prompted the House of Representatives to launch an impeach inquiry against the Republican president in late September.

And on Wednesday, in a historic vote, the House impeached Trump on charges of abuse of power and obstructing Congress. No Republicans voted in favor of the impeachment articles, while two Democrats voted against the first charge and three against the second.

Meanwhile, the president Saturday criticized House Speaker Nancy Pelosi for holding off on sending the articles of impeachment against him to the Senate.

“It’s so unfair,” Trump said during a speech to conservative student group Turning Point USA, saying that the speaker adopted the strategy because she has “no case.”