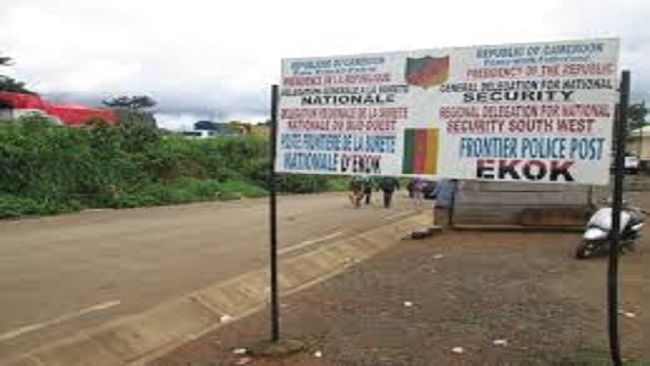 Mindful of the fact that the Biya regime is unable to refine enough crude for local consumption, the Francophone dominated armed forces destroyed petrol worth more than 400 million FCFA in the Ekok County in Ambazonia.

The Cameroon government forces waging a war against the people of Southern Cameroons said it destroyed the fuel imported from Nigeria and sold inside Cameroon territory. Cameroon Concord News gathered that the depots in Ekok were destroyed last week.

Some traditional rulers in Manyu including the Chief of Ekok had reportedly asked the Yaoundé regime to legalise and regulate the sale of petrol as a means of job creation. The Francophone government has not indicated any willingness to legalise or regulate the fuel sector but is now bend on stifling the Ambazonian ecomony.

The military post in Ekok now has a gunboat to fortify its operational capacity in the Mfum River and had intensified patrols in the border settlements and waterways in the Federal Republic of Ambazonia.  The intensified patrols by the French Cameroun army command had led to the arrest of hundreds of Southern Cameroonians. A similar action was staged in Mamfe at the Satom Bridge.

By Judith Fon in Ekok