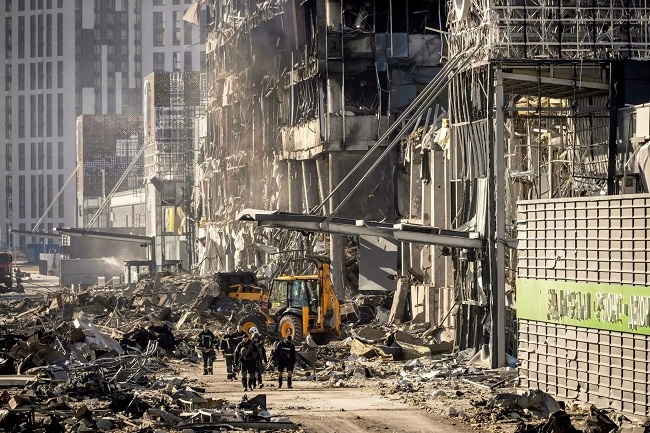 Ukrainian President Volodymyr Zelensky says he is ready for talks with Russian counterpart Vladimir Putin “in any format”.

The Ukrainian leader indicates the status of Russian-occupied Crimea and breakaway Russian-backed statelets in Donbas are up for discussion, adding that any peace deal will be put to a referendum in Ukraine.

US President Joe Biden warns Russia will pay a “severe price” if it uses chemical or biological weapons in Ukraine.

He says Moscow’s claim that the US helped Ukraine develop biological weapons is “a clear sign” President Vladimir Putin is himself considering biological or chemical warfare.

The Pentagon says Russia is boosting air and sea military operations in Ukraine, flying more than 300 missions in the past 24 hours, in a bid to break Ukrainian resistance.

At least eight people are killed in the bombing of a shopping centre in northwest Kyiv. The 10-storey building is completely destroyed in the blast. Russia claims the mall was used to store rocket systems.

Kyiv mayor Vitali Klitschko announces a new curfew for the capital from 8:00 pm (1800 GMT) on Monday to 7:00 am on Wednesday.

Ukraine’s leaders accuse Russian forces of firing on unarmed protesters in the occupied southern city of Kherson. Videos emerge to show residents fleeing flash-bang grenades and bursts of gunfire during the latest demonstration against the Russian invasion.

The head of the international Red Cross, Peter Maurer, tells AFP he will travel to Moscow this week for talks on the conduct of the war in Ukraine and efforts to secure visits with detainees.

Kremlin-allied tabloid Komsomolskaya Pravda reports 9,861 Russian troops have been killed and 16,153 injured in the nearly month-old war, 20 times the official tally. The figures are quickly removed from its website.

Nearly 3.5 million Ukrainians have now fled the country following Russia’s invasion, the United Nations says, of the 10 million who have been displaced from their homes.

Russia summons the US ambassador to Moscow to protest at Biden branding Putin a “war criminal”, saying relations are “on the verge of rupture”.

A Russian court bans Facebook and Instagram as “extremist”, part of the Kremlin’s sweeping efforts to censor news about the war in Ukraine.