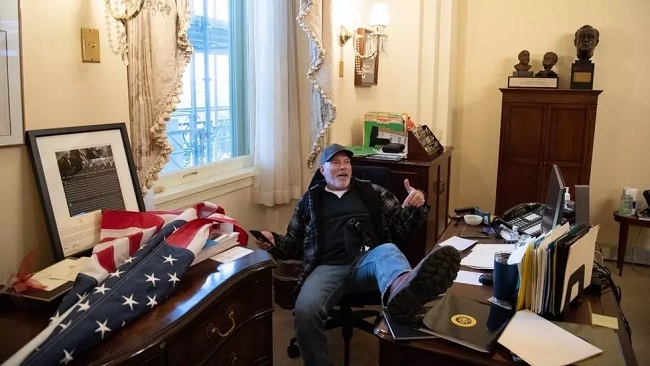 Who’s who in the Trump mob: Conspiracists, neo-Nazis and gun activists 0

The tattoo-chested man in a horned headdress, the middle-aged intruder with his foot on Speaker Nancy Pelosi’s desk and the woman shot dead by police: Their images have been beamed around the world but who are the Donald Trump supporters who stormed the Capitol?

Richard Barnett, 60, from Gravette in northwest Arkansas, barged into the office of House Democrat leader Pelosi where he was photographed leaning back in a chair with his left foot on her desk.

Barnett, known locally for hosting the pro-gun Facebook group 2A NWA STAND!!!, told Arkansas news channel KFSM 5News that he somehow ended up there by accident.

“I didn’t break the doors. I was shoved in. I didn’t mean to be in there. Hell, I was looking for the bathroom,” said Barnett.

He added though that he had every right to be in Pelosi’s office.

Before leaving, Barnett stole an envelope and left Pelosi a note calling her a “bitch,” he told KFSM 5News.

He describes himself as a “digital soldier” of the movement that claims Trump is waging a secret war against a global liberal cult of Satan-worshipping pedophiles.

The 33-year-old Angeli presented himself as a “shamanist and consultant for the Trump supporters” when he was photographed by AFP at a rally in Phoenix, Arizona in November. He was wearing his headdress then too.

“We’re patriots on the front lines in Arizona who wish to take our positive energy to DC,” he wrote on the ultra-conservative social network Parler in December.

Social media users noted similarities between Angeli’s look and that of 1990s  Jamiroquai singer Jay Kay, forcing the jazz-funk performer to assure fans that he wasn’t in Washington on Wednesday.

Photographed standing alongside Angeli was 29-year-old Matthew Heimbach, “considered by many to be the face of a new generation of white nationalists,” according to the Southern Poverty Law Center.

Heimbach was one of the organizers of the far-right rally in Charlottesville, Virginia in August 2017, on the sidelines of which a woman was killed by a neo-Nazi.

Ashli Babbitt was named by police as the woman shot at close range by a police officer as she tried to climb through a broken window in the hallway of Congress.

The 35-year-old from San Diego later died from her injuries. KUSI-TV quoted her husband as saying she had been a staunch Trump supporter and “a great patriot.”

Babbitt was a US Air Force veteran who described herself as a “Libertarian” on her Twitter page.

On Tuesday she tweeted: “Nothing will stop us….they can try and try and try but the storm is here and it is descending upon DC in less than 24 hours….dark to light!”

Looking particularly pleased with his day’s efforts was a man in a Trump winter beanie hat smiling and waving at cameras as he carried Pelosi’s lectern.

Local media identified him as 36-year-old Adam Johnson, a father of five from Parrish, Florida.