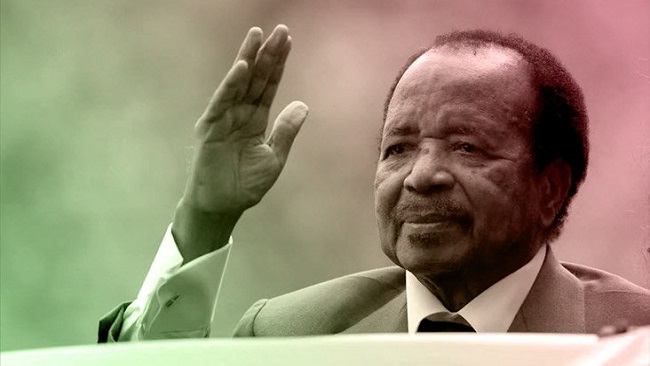 Yaoundé: Biya will not groom a successor 0

89-year-old President Paul Biya, in power since 1982, has reportedly reaffirmed he will retire before the next presidential election and stressed that he is not grooming anyone to succeed him; a well-placed source deep inside the presidency has hinted Cameroon Intelligence Report.

”I have said it before and during my press conference with French President Macron that when my term ends I will retire to my village,” our source quoted the Cameroonian dictator as saying recently inside Etoudi.

Our informant added that the octogenarian leader also pointed out clearly that he will let the new generation choose their next leader.

Cameroon Intelligence Report understands Biya told his top aides that he had never indulged in the process of grooming a successor and he will never do that.

Our Yaoundé city reporter covering the head of state said Biya wants his successor to come from the ruling CPDM party and he has always opined that Cameroon opposition parties are disorganized and badly managed.

For many months now, there have been secret discussions at the Unity Palace on who should succeed Paul Biya, Cameroon’s ailing and desperately old President who has been in power for 40 years but has nothing to show for his long stay in power.

As Mr. Biya’s health continues its relentless march towards the tubes, his inner circle is working closely with the French government on the possibility of making Franck Biya, the ruthless dictator’s eldest son, the country’s next president.

According to another source at the Unity Palace who elected anonymity, the plan to hand over power to Franck Biya is now complete and the French have put their seal of approval on the plan they fear could trigger a civil war in the country.