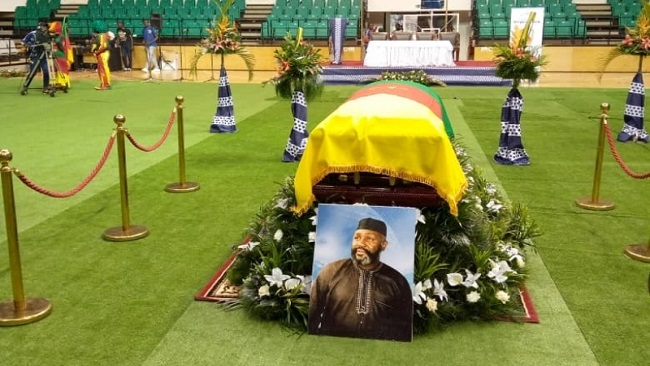 Stephen Eta Tataw 57, the renowned Southern Cameroons footballer who captained the Indomitable Lions of Cameroon will be buried today Saturday, August 29, 2020, at 1 p.m. at the Catholic cemetery at Mvolyé, located in the 3rd district of the French Cameroun capital, Yaoundé.

The late captain of the 1990 Cameroon team will be accorded final tributes during a ceremony scheduled at the Yaounde Sports Palace, under the chairmanship of the Minister of Sports and Physical Education, Narcisse Mouelle Kombi and a so-called personal representative of the Head of State.

In addition to the Requiem Mass, the late Javion as he was popularly known will receive a posthumous decoration after testimonies from his family, former teammates, FECAFOOT and the Biya regime.

Yesterday’s ceremony at the Yaounde Central Hospital was very popular, despite measures to limit gatherings because of the COVID-19 pandemic. Several generations of the Indomitable Lions, including Samuel Eto’o and Roger Milla answered present. French Cameroun political and sports authorities also took part notably the Minister of Sports, Mr. Mouelle Kombi and Seidou Mbombo Njoya, the President of FECAFOOT.

Winner of the 1988 African Cup of Nations in Morocco, the man with 43 caps went down in history as captain of the mythical team that reached the quarter-finals of the 1990 World Cup.