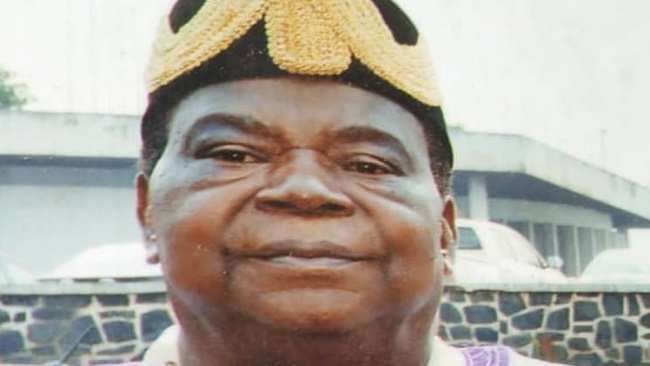 The people of Mbinjong, Upper Bayang Sub Division in Manyu were yesterday mourning the death of legendary traditional ruler Chief Tabetah Ashu Tarkang who died at the extension of his palace in Yaounde on Thursday after a long battle with an undisclosed illness.

A family source hinted Cameroon Concord News that he died after visiting a private clinic in late afternoon yesterday. He was surrounded by his wife and some family members and he died very peacefully after a long illness that started last year.

His funeral is due to be held at his Mbinjong Village following directives from Minister Victor Mengot who also moonlights as senior elite from Mbinjong.

Cameroon Concord News Group Chairman Soter Tarh Agbaw-Ebai, who wrote so many stories about the late Chief on the pages of the Herald newspaper, was amongst the first to pay tribute to the Manyu academic.

“It’s a very sad day and the end of an era,” he said. “I’ve known His Royal Highness Chief Dr Tabetah since the 90s and we had great days in MECA Yaounde and so many great moments in SWELA. He was a great mentor and a marvellous person to work with. We’ll miss him.”

Chief Tabetah was best-known as a peace maker in MECA Yaoundé particularly when the Agbor Tabi brothers were at daggers-drawn-positions.

The onetime Special Adviser to Prime Minister Peter Mafany Musonge, whose wealth was believed to run into hundreds of millions of FCFA, also enjoyed something of a playboy image. He dated a string of beautiful women and finally got married to Sophie Besong Tabetah.

Chief Tabetah was credited with changing the face of Manyu politics with his calm approach to every political situation.

He remained one of the most prominent sword less patriotic Manyu soldier right up to his death, even though he had adopted a considerably lower profile in recent years.

Dr Tabetah Ashu Tarkang James was born in Mbinjong and was one of the Manyu children that the late Dr AD Mengot gave the opportunity of conquering education home and abroad.