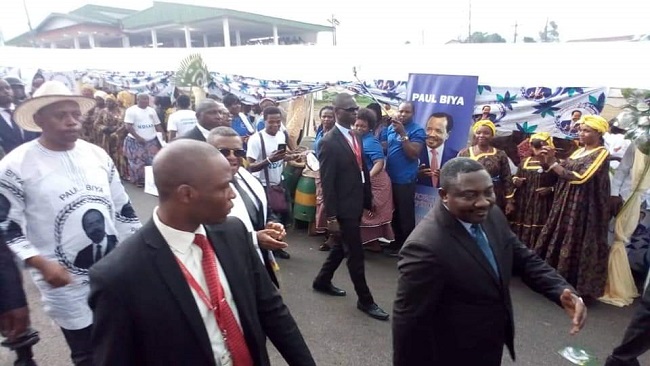 Cameroon’s Prime Minister, Dion Ngute, arrived in Buea on Thursday, February 6, 2020, where he campaigned for his party, the Cameroon Peoples Dictatorship Movement (CPDM) that has been in power for 37 years with nothing to show for.

The low-energy Prime Minister came to the Southwest regional headquarters in an attempt to demonstrate that there is security in the region.

Before reaching Bongo Square where the long and empty campaign speeches were read, there was gunfire in Muea, some 2 km from where he read his long boring speech. The gunfire was a reminded that the residents of that land were still unhappy with the government he is serving.

As a native of the Southwest region, Dion Ngute is expected to drum up support for his disintegrating party in his region.

But there is nothing that can really make the people of this rich land to admire a government that has killed many of its citizens. Selling the CPDM in the Southwest is like trying to sell a pig to Americans, claiming that it is a beautiful girl.

The people of the Southwest have resoundingly rejected a party they consider as a crime syndicate presided over by a conman they consider to be worse  than Al Capone, the once upon a time Mafia boss.

Before visiting the region, some 700 prisoners from the Yaounde Maximum Prison had been shipped to the region to welcome him and to hoodwink the population into believing that Mr. Ngute and his party are popular.

The 700 criminals will be voting in the upcoming twin elections whose results are already known. However, despite PM Ngute’s presence in Buea, it has been reported that the region is in total lockdown.

In Kumba, not even flies could visit some of the corpses that litter the streets after the military went on a killing spree a few days ago.

The same is reported of Ekona, Mamfe, Tiko, and Muyuka where soldiers rounded up all young men on Monday. The young men are being asked to pay CFAF 50,000 if they want to be free.

For those who do not have the money, they are being threatened with death, and many of them have already been taken to Buea and other towns in the region with larger prison facilities.

This year’s election will be taking place in an atmosphere of fear and intimidation, as the government seeks to prove that there is peace across the country.

But there is no peace in the two English-speaking regions of the country. Many soldiers were killed on Wednesday in Manyu Division as Southern Cameroonian fighters threw a grenade into their truck.

Many were wounded and they have been rushed to hospitals in East Cameroon.

Cameroon Concord News Group correspondents on the ground are gathering more information on the slaughtering of army soldiers who had been sent to the region to intimidate the population into submission.

More will be yours as the information becomes available.