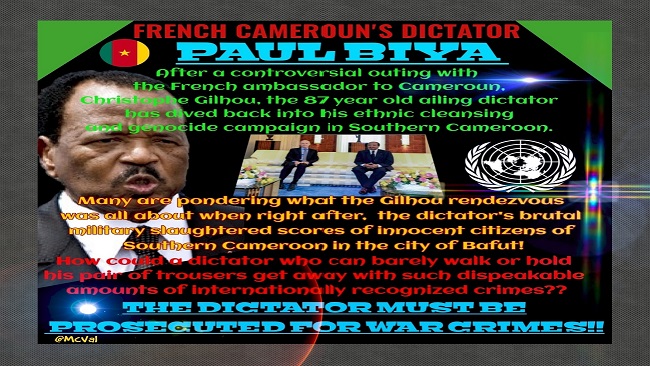 Switzerland has made available the sum of three billion CFA francs to help the French Cameroun army continue with its genocidal campaign in Southern Cameroons. But the Swiss ambassador to Yaoundé, Pietro Lazzer told the world that the donation was to combat the coronavirus.

According to the chief Swiss diplomat, the money is for humanitarian efforts but Cameroon Intelligence Report has documented evidence that the regime in Yaoundé is using the money to pay Cameroon government army soldiers currently killing innocent Southern Cameroons civilians in Bafut.

The Swiss have increased their business empire in Cameroon and the Swiss embassy in Yaounde is coordinating support from Swiss companies in Cameroon to help the Biya regime survive.

Ambassador Pietro Lazzer told Cameroon radio and television that Switzerland fully backs the ceasefire calls in Southern Cameroons as advocated by the United Nations Secretary-General last month. “Violence needs to stop in this area because the fighting of COVID-19 is a priority,” he said. The diplomat has maintained a kind of silence of the lamb on reports that Cameroon government soldiers have invaded Bafut in the Mezam County and killed scores of civilians.