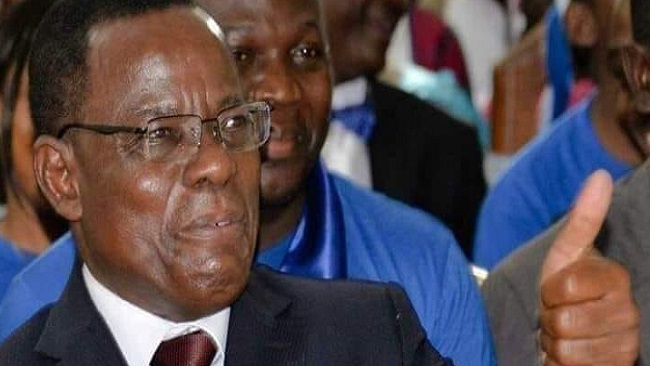 The supposed winner of the October 7 presidential poll, Prof. Maurice Kamto, on Wednesday, October 17, 2018, made an impassioned appeal to members of the Constitutional Council for justice to be done in a hearing on post-electoral fraud in Cameroon.

Prof. Kamto, who had already declared himself the winner of the poll, said it was time for members of the Constitutional Council to understand that Cameroon needed to move away from the neo-colonial straight jacket that had been worn on the country for more than five decades.

The learned professor of law who spoke in the afternoon session of the hearing pointed out that Cameroon needed to change and he was prepared to be the flagbearer of that change given that the people had chosen him to lead the process in a poll that was marred by fraud and irregularities just to meet the needs of the incumbent.

He underscored that taking the right decision to grant the people’s wish would be the surest way to deliver the country’s youth from the damnation and hardship imposed on it by the regime of the out-going president, Paul Biya.

Prof. Kamto also pointed out the danger in not listening to the wishes of the people. He stressed that he would defend the mandate granted to him by the people and that the struggle would continue regardless of the outcome of the hearing.

He said he had been accused of arrogance and tribalism just to make him look bad. He charged that the whole notion of tribalism in the country was a government fabrication, adding that he would be the leader of all Cameroonians and would fight for the common man regardless of the person’s tribe.

He reiterated his commitment to solving the Southern Cameroons crisis, adding that a sincere and an inclusive dialogue would be the surest way to get the country out of the pretty mess in which it found itself.

He expressed surprise at the indifference displayed by the out-going president regarding the crisis in the two English-speaking regions of the country, adding that for Cameroon to be one and indivisible, a new and innovative approach to problem-solving needed to be adopted.

Meanwhile, earlier in the day, Prof. Kamto’s team had produced more evidence to convince the Biya appointed Constitutional Council to understand that a decision other than the one that confirms the people’s choice might plunge the country into a spiral of violence and destruction.

But the icing on the cake came when Barrister Felix Nkongho Agbor-Balla spoke to the Constitutional Council, urging its members to listen to the people’s wishes and aspirations, as there could be consequences that might come with lots of regrets.

He called on the Constitutional Council to understand that when the people do not get listened to, there will always be adverse consequences. He recalled that since the government failed to listen to Southern Cameroonians lawyers and teachers in October 2016, the country has been going through a tough time and that the fear of a separation was real.

He underscored the point that no law or ordinance could be mightier than the will of the people. He recognized the capabilities of the members of the constitutional Council, urging them to prove that the country was bigger than any individual.

He pointed out that many leaders would come and go, but Cameroon will always be around and it will be prudent and wise for the Constitutional Council to take a decision that would give members of that august body an enviable place in the country’s history.

Another brilliant barrister who distinguished himself as a legal force to reckon was Barrister Ikome Mbella of the Southwest region who drew the Constitutional Council’s attention to the tragedy unfolding in the two English-speaking regions.  He advised Constitutional Council members to do justice to the people of Cameroon to prevent the country from being caught in the throes of chaos that might destroy and interrupt lives.

Other lawyers weighed in on the matter, urging the Constitutional Council member to do the right thing. Some advised them to understand that though they had been appointed by the country’s President, Paul Biya, they still had the right and obligation to exercise their right to apply the law as expected by the people of Cameroon.

It should be recalled that the Constitutional Council had been created by Mr. Biya and all its members are supporters of the ruling CPDM. The wife of the president of the Constitutional Council, Clement Atangana, is a CPDM parliamentarian, the wife of Mr. Fouman Akame is also a CPDM parliamentarian, and Professor Joseph Marie Bipoum Woum was a minister under President Paul Biya and chairman of the board of directors of several state-owned corporations.

For her part, Justice Florence Arrey, another member of the Constitutional Council, is the recognized long-term girlfriend of the country’s current justice minister, Laurent Esso, and the two have a couple of children from a relationship that has lasted decades. Laurent Esso, it should be underscored is President Paul Biya’s closest collaborators and he played a significant role in the establishment of the Constitutional Council and the appointment of its members.

Prof. Kamto’s impassioned address might fall on deaf ears, but its impact will linger for a long time. The outcome of the hearing may already be known, but the people’s reaction is what is keeping the government awake all night, especially as the learned professor keeps on underscoring that he would defend the mandate conferred on him by the people of Cameroon at all cost.

By Kingsley Betek and Sama Ernest in Yaounde